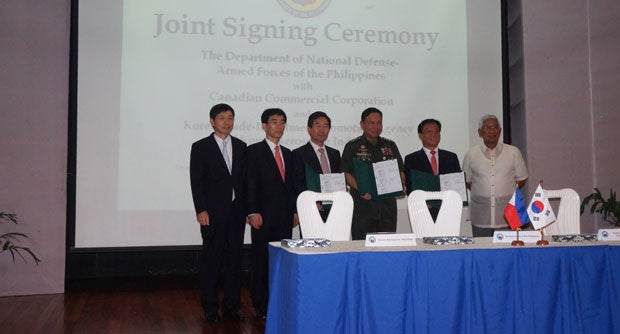 Representatives from Philippines and South Korea signed the contract for 12 FA-50 lead-in trainer fighter jets at Camp Aguinaldo on Friday.

MANILA, Philippines– The contract signing of P23.7 billion worth of brand new lead in trainer fighter jets and combat utility helicopters on Friday ushered a new era in Philippine military aviation amid the country’s bid to defend maritime borders.

“With the eventual delivery and acquisition of these new air assets our air force can already forget the lingering naughty joke that it is all air without force,” Defense Secretary Voltaire Gazmin said in his speech at the joint contract signing held at Camp Aguinaldo.

The deals that were signed include the 12 lead-in trainer jets from Korean Aerospace Industries (KAI) of South Korea worth P18.9 billion and eight Bell 412 EP combat utility helicopters from Canada worth P4.8 billion.

“In the Philippines we have an old saying that goes like this, “Pagkahaba-haba man ng prusisyon, sa simbahan din ang tuloy. Literally, this translates to no matter how long the procession is, it still ends up in the church,” Gazmin said.

“What we went through these past months even years is akin to a procession: slow, tedious and full of challenges. And like a procession we knew where our destination was and why we’re doing it,” he added.

The lead in trainer fighter jets, tagged as “supersonic,” “state of the art,” and “multi-role combat” will be able to prepare pilots for more advanced aircraft. It is the light combat version of the T-50 Golden Eagle light attack aircraft.

KAI President and Chief Executive Ha Sung Yong said in his speech that the lead-in fighter trainer jets are “the brilliant choice that the Philippine Air Force made.”

“It is not enough to emphasize that FA-50 will take great contribution to defend territorial air as well as a cornerstone to reinforce the airpower of the Philippines,” said Ha.

The acquisition of the F-50s is the most upscale military modernization project that the Philippine government has sealed.

Kotra is the agency of South Korea in charge of the commercial transaction in behalf of the government.

“I am sure KAI will do its best to meet the expectation of the PAF. And as ambassador of my country, I guarantee that you will be satisfied with this Korean product,” Lee said.

The acquisition of the fighter jets is one of the two big ticket items in the P85-billion AFP Modernization Program. The other is the purchase of two brand new frigates worth P18 billion.

The Philippines also signed eight brand new combat utility helicopters that are acquired from the Canadian Commercial Helicopter, the designated agency in behalf of the Canadian government.

The helicopters are described as “a daily workhorse in the most extreme climates on the planet.”

Bautista and Canadian Ambassador to the Philippines Neil Reeder signed the contract.

“Canada’s aerospace and defense industry offers a strong and varied range of products relevant to the challenges faced by the Philippines’ DND,” Reeder said in his statement.