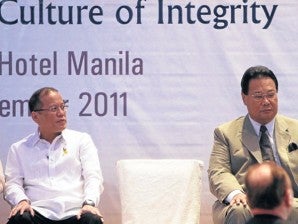 CULTURE OF INTEGRITY. President Aquino shares the stage with Chief Justice Renato Corona during the First Integrity Summit between government officials and business leaders at The Marriott Hotel in Pasay City on Wednesday. EDWIN BACASMAS

It takes two to tango.

President Benigno Aquino III on Wednesday said businessmen who had taken the so-called “Integrity Pledge” had no more excuse to take a short cut, offer a bribe, or avoid paying the right tax in dealing with the bureaucracy.

In a speech at the First Integrity Summit between government officials and business leaders, Mr. Aquino said his administration had institutionalized transparency with the appointment of officials with integrity and the full disclosure of projects.

“But instilling a culture of integrity in government is only one aspect of the equation. We must also foster the same culture in the private sector, and this is why what you are doing today is very important,” he said.

After getting signatures on a pledge for integrity, the business leaders presented to Mr. Aquino a Unified Code of Conduct which details how corporate executives and their employees will uphold the highest standards of ethics in their transactions.

“This is the result of more than five months of consultations and meetings,” Edilberto de Jesus, president of the Asian Institute of Management, told the President. “This is a collective effort of the private sector to conduct business with integrity and to signify cooperation with the government to combat corruption.”

The Integrity Initiative is spearheaded by the Makati Business Club and the European Chamber of Commerce. Close to 700 companies have signed the Integrity Pledge. Organizers expect the number to reach 1,000 by the yearend.

Tony Kwok of the Hong Kong Independent Commission Against Corruption said at the summit that the war on corruption should not be left for the government alone. He said private persons and businesses should do their part as well.

“Don’t ask why the government is failing to fight corruption. Ask yourselves. It takes two to tango,” Kwok said.

Mr. Aquino announced that he was leaving for New York next week to attend the Open Governance Forum upon the invitation of US President Barack Obama.

“I will be proud to tell him as well as the representatives of several other countries, how in the Philippines, the effort for integrity in governance—the effort for creating a transparent relationship between the people and their government—is one that is shared by the government and the private sector,” he said.

Since assuming the presidency, Mr. Aquino has made the campaign against corruption the centerpiece program of his administration.

However, the President has been criticized for hemming and hawing on the long-pending freedom of information bill that seeks full disclosure of government transactions and assures every citizen, with few exceptions, access to public records.

He said that since July 2010, 61 tax evasion and 43 smuggling cases had been filed with claims totaling P26 billion and P54 billion, respectively.  Revenues collected had increased by 13.64 percent year-on-year, he added.

“It is very possible for a corporation to succeed and to prosper without resorting to corruption,” said Jollibee Foods Corp. CFO Ismael Baysa. “Always try to do the right thing and if you have to walk away from an opportunity in order to avoid corruption, you walk away.”

SM Investments Corp. CFO Jose Sio said: “There’s no way you can cleanse the system if the leader on top is not leading the way. Any organization, in corporate matters, should insist on corporate governance. This has to be enshrined in all organizations to be effective.”

Baysa and Sio, both winners of the annual search for outstanding CFO by ING-Finex, were asked what advice they would give to CFOs faced with corruption-related dilemma.

Baysa, who worked with Procter & Gamble and Union Bank of the Philippines prior to Jollibee, said he had seen these corporations prosper without resorting to corruption.

“Prosperity and success are possible without corruption even in the midst of a corrupt environment,” he said.

Sio pointed out that the administration’s thrust of improving governance was “on the right track.”

“Let’s set our house in order. Otherwise this will just become a vicious cycle,” Sio said.