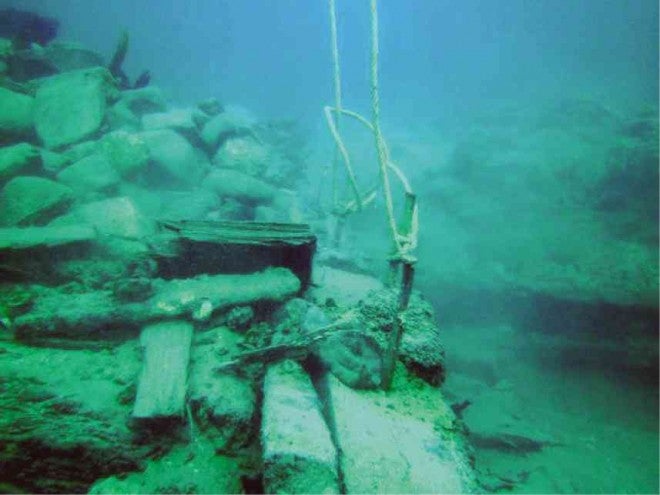 SUBIC divers found lifting ropes and other devices they believed were used by looters to steal parts of a sunken shipwreck. CONTRIBUTED PHOTO

SUBIC BAY FREEPORT, Philippines—Five men from Bataan province have been charged this week with looting an underwater shipwreck which the Subic diving community considers a historical treasure.

The unlicensed salvage operations took place about 200 meters from the shoreline of Grande Island, prompting the police to charge Danilo Casapao, Junel Rivera, Armando Salazar, Manuel Casapao and Michael Eduarte, all from Barangay (village) Mabayo in Morong town, in the office of the Bataan provincial prosecutor in Balanga City on Tuesday.

Police caught the suspects picking through a wrecked ship near Grande Island on March 20. But police released them for lack of evidence. The suspects are at large.

Scott Sharpe, president of the Subic Bay Divers Association, said the suspects may have been looting a “sister ship” of the vessel, San Quinten, which is considered the oldest sunken shipwreck on Subic Bay.

“That wreck might be a turn of the century sister ship to the San Quinten that sank along with another Spanish gunboat,” Sharpe said. He said the looted wreck needs to be examined by the National Museum.

Police said they found compressors, barrels, several hoses that are estimated to reach 100 feet in depth, and a diesel engine, which, they said, the suspects used to loot the wreck.

In a report, Lt. Jan Terazona, station commander of the Philippine Coast Guard in Subic, Zambales, said his office had not issued the suspects a salvage permit, so they were not authorized to secure artifacts from the sunken shipwrecks.

Sharpe said divers from the Arizona Dive Shop and from his organization discovered the looting on March 19 when they found lifting ropes, blue barrels, an anchor chain and large timber planks in the water.

Edmund Cardozo, a diver of  Ocean Adventure Marine Theme Park, also saw the looting. In his sworn affidavit, Cardozo said he took photographs of the items that the suspects allegedly used to lift an anchor from the wreck.

The seabed of Subic Bay is home to a number of historical shipwrecks, which also serve as recreational dive sites.

Read Next
2 universities in Baguio shift calendars, too
EDITORS' PICK
Global COVID-19 death toll passes two million
Experience clearer calls nationwide with Smart VoLTE
Fairways & Bluewater Resort Boracay shines in the International Arena
CopperMask helps block coronavirus in airborne droplets in style
PH named 2nd most ‘Instagrammable’ place in the world
PH back on list of countries eligible for U.S. H2 visa program
MOST READ
3 found bound and shot dead on Bulacan roadside were abducted from MM
Trump to leave town early Wednesday before Biden inauguration
Atienza says House can now focus on probes after cleaning up Cayetano’s budget mess
So how much is the ‘kick-vac’?
Don't miss out on the latest news and information.