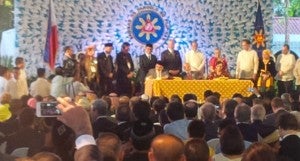 DAVAO CITY, Philippines—The Philippine Center for Islam and Democracy (PCID) urged the government to work toward the “convergence” of the agreements that it signed with two Moro groups for genuine autonomy.

In a statement issued in connection with the signing of the Comprehensive Agreement on Bangsamoro, the PCID stressed the importance of the government consolidating the CAB with the agreement forged with the Moro National Liberation Front (MNLF) in 1996.

“We have been witnesses to the Bangsamoro’s struggle for their identity, for fair and good governance, and for inclusive growth and development,” the PCID said.

The Muslim group advocating democracy in Islam said that with the convergence, the government could proceed to focusing on much-needed attention on the socio-economic and political development of the region.

PCID describes itself as a non-partisan, non-profit organization “dedicated to the study of Islamic and democratic political thought and the search for peace, democracy and equitable and sustainable development in Muslim communities.”

In Kauswagan, Lanao del Norte, Sultan Camlon Moner, a ranking MNLF leader, said many MNLF members shared the optimism that the CAB would benefit all Moro.

“We support inclusive peace and we support peace to be able to put together the diverse voices of Mindanao,” Salazar said.

She said for her, genuine peace would not be achieved by signing papers.

“Real peace would only be achieved if we the people would work hard for it. Let us support peace,” Salazar said.

Commissioner Mehol Sadain of the National Commission on Muslim Filipinos expressed optimism over an imminent peace in Mindanao because of the support – not just by the international community – but the people of the island themselves.

“I can see a strong support for the CAB now. Some communities even offered assistance towards the realization of the the Bangsamoro,” Sadain said.

Government chief negotiator Miriam Coronel-Ferrer said the signing of the CAB was important “not only for the Bangsamoro” but also for “all the people of Mindanao and all other Filipino citizens who have all to gain as one country pursuing its unfinished task of nation-building.”

“It is also our global contribution to the pursuit of peace in our immediate neighborhood, the Southeast Asian region, and the rest of the world,” she said two days before the signing.

Ferrer said the Philippines’ experience in solving rebellion has become “a rich source of inspiration to (other) countries that remain challenged by their respective domestic conflicts.”

In a separate statement, the Cordillera Bodong Administration (CBA) also celebrated the signing of CAB, calling it “a hopeful attempt to finally resolve the four decades conflict in Mindanao that spelled hundreds if not thousands of Filipino lives.”

But Gabino Ganggangan, CBA secretary general, warned of challenges that should be tackled, as their experience when the 2011 agreement with the Cordillera People’s Liberation Army on disposition of firearms was signed.

“Challenges since mired its implementation, but these were overcome by the perseverance of the parties who saw the agreement as a chance towards meaningful change, a chance towards communities’ engagement in governance reform, and a chance to give due respect to the many lives lost in the Cordilleran struggle for self governance and development,” he said.

The Rebolusyonaryong Partido ng Manggagawa ng Pilipinas/ Revolutionary Proletarian Army/Alex Boncayao Brigade (RPMP/RPA/ABB) said the signing of the CAB “heralds a historic step that will undertake the immense task of healing wounds of a decades-long armed conflict rooted in the centuries-old social injustice” in Mindanao.

“The RPMP/RPA/ABB recognizes that with this comes the equally challenging work of instituting reforms and changes so that democracy that values pluralism and social justice may truly bring about progress and development to all, especially to the Bangsamoro people,” the former rebel group said in a statement.