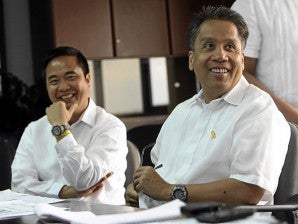 “Instead of this early promoting the presidential bid of Secretary Mar Roxas, DoTC Sec. Joseph Abaya should better concentrate more on the pressing problems besetting the MRT-LRT like the endless lines, computer glitches, non-working elevators and escalators, sardine-like coaches, accidents and many more so that our commuters would have a safer and more comfortable way of getting to their workplaces or schools and back home,” said Bayan Muna Rep. Carlos Isagani Zarate in a statement.

The DOTC is the Department of Transportation and Communications that oversees the management of the Metro Rail Transit and Light Rail Transit.

Abaya previously declared Roxas as the Liberal Party’s choice for standard bearer for 2016 amid the announcement by Vice President Jejomar Binay, who beat Roxas in 2010, to seek a higher post in 2016.

Zarate said Abaya’s misplaced priority showed his lack of concern for the mounting complaints voiced by the horde of passengers lining up for hours to ride the MRT-LRT.

Zarate claimed that this “was deliberate on the part of Abaya to condition the mind of the public on the inevitability of a fare rate hike.”

“This is ‘planned obsolescence’ so that they can rake in more profits at the expense of the commuters.  From all indications, the Aquino administration is already dead set on increasing the fares of the MRT and LRT as it has  been proposing this added burden since 2010, and, the cost of these deals being entered into by MRT-LRT may then be passed on to consumers,” said Zarate.

Aside from mismanagement problems, Zarate noted that the MRT-LRT operations have been marred by corruption issues, which included so far the alleged extortion attempt by a DOTC official on a Czech company, and the supposed rigged bidding on the unified ticketing system, common terminals and MRT-7 extension.

“These issues are now with the various committees of the lower house of Congress for investigation,” said Zarate.