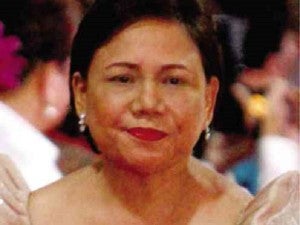 Last week, Villar admitted that she had met and dined at Tuason’s “Malampaya Mansion” in Makati but said it was “purely social.”

It was Senator Jose “Jinggoy” Estrada who mentioned  about  a senator, who was with him when he went to  Tuason’s house in Makati.  He did not name the senator but Villar immediately admitted that she is the one being referred to by Estrada.

Both Estrada and Tuason have been charged at the Office of  the Ombudsman  in connection with the P10-billion pork barrel scam  allegedly masterminded by  Napoles.

Whether Estrada’s mention of the incident had malice or not was something that Villar was not concerned at all.

“I don’t know kung may malice yun or what. I’m not concerned. It’s just a dinner, a social dinner. I don’t find anything wrong with that. Even though (there is) malice or not, I don’t care. I have nothing to hide,” Villar added.

Guess who came to dinner at Ruby Tuason’s ‘Malampaya Mansion’?