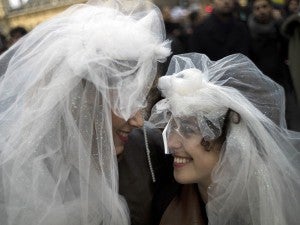 LONDON, United Kingdom – When the clock strikes midnight on Friday, gay and lesbian couples across England and Wales will begin exchanging vows as a historic law legalizing same-sex marriage finally comes into force.

The marriage law was the final victory in a long battle that has already secured the same age of consent as heterosexuals and the right to adopt — but it was still a day many thought would never come.

“When I came out in 1983 when I was 20, the age of consent was 21. My first sexual relationship was with another 20-year-old, and we could have both been sent to prison,” said Matthew Toresen, a community worker from Northampton in central England.

“To go from that to getting married, in one little lifetime — I never imagined that day would come.”

Toresen, now 51, is marrying his long-term partner Scott Maloney, 45, on Saturday, the first day that gay marriages are possible under the law.

The couple have spent years campaigning for gay rights, from lowering the age of consent to tackling discrimination in the military, and describe gay marriage as “the last hurdle”.

Civil partnerships were introduced in England and Wales in 2005, effectively giving gay couples the same legal rights as heterosexuals.

But campaigners insisted that only full equality would do, a principle that the majority of the public accept — there were no mass protests in Britain of the kind seen in France last year when same-sex marriage was legalised.

Gay marriage was approved by the British parliament last year with the support of Prime Minister David Cameron, despite vocal opposition from some members of his Conservative party.

The Church of England also objected, and was given an exemption from conducting same-sex ceremonies.

History will be made this weekend, and couples are vying to be first to be married by holding ceremonies shortly after midnight on Friday.

Among them are Peter McGraith and David Cabreza, who will be declared “husband and husband” by a London registrar in front of family, friends and their two adopted children.

They are hoping to use the media attention from being first to send a message to countries where gay marriage is but a distant dream.

“There’s a lot of gay men and lesbians around the world who are not invited to the party,” said McGraith, a 49-year-old clothing designer who is marrying his partner of 17 years.

Gay marriage is now legal in 15 countries but discrimination persists, particularly in the Middle East and Africa. Meanwhile in Australia and India advances in gay rights have been reversed.

Teresa Millward, 37, also hopes her wedding in Yorkshire in northern England on Saturday will send a message to young people in Britain.

“There are hundreds of young people today who are struggling with coming out, who are ashamed or worrying that people will judge them,” Millward told AFP.

“To have marriage and to have these equal rights means that hopefully more people can celebrate their relationships.”

When Millward came out at the age of 16, her evangelical church group thought they could “cure” her of being a lesbian by locking her in a room for three days and praying for her.

“It was pretty horrific. After two days I realized I would have to just play along to get out of there, so I had to pretend,” she said.

She is marrying 50-year-old Helen Brearley, her partner of 11 years with whom she runs an online lesbian clothes and gifts shop.

Millward’s father will walk both women down the aisle, Brearley’s father having died when she was young. Millward will be wearing a cream lace knee-length dress, and Brearley a black and blue suit.

For all the joy the weddings will bring, discrimination and bigotry remains an issue in Britain.

In January, a local councillor was suspended from the anti-immigration UK Independence Party (UKIP) after blaming devastating floods on the legalisation of gay marriage.

Louis Monaco, 46, an American clinical psychologist, and Aarron Erbas, a 23-year-old PhD student, have hired security for their wedding in London to stop Erbas’ family disrupting the event.

But the couple have refused to let that overshadow Saturday’s celebration. They have 45 people coming from around the world and will have a party afterwards in the pub where they met 18 months ago.

“Aarron turned into ‘bridezilla’ the moment we booked the town hall — he had the venue booked and the invitations made by the end of the day. It was really amazing!” said Monaco.