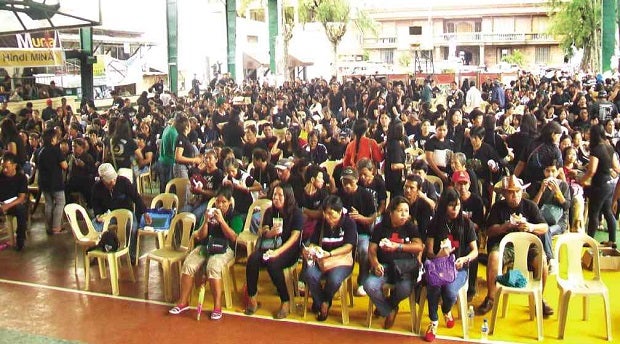 PROTESTERS from six towns in Marinduque converge at a covered court near the municipal hall of Boac, the town worst hit by the 1996 disaster caused by 200 million tons of mine waste discharged into the Boac River. JOFEL JOYCE LANCION/INQUIRER SOUTHERN LUZON

LUCENA CITY—More than a thousand people held a rally on Monday in Boac, Marinduque province, to protest a $20-million deal being offered to the province  as compensation for the 1996 mine waste spill that killed the Boac River and its tributaries and is considered the country’s worst mining disaster.

Boac Councilor Rolando Larracas, in a phone interview, said the offer was “gravely disadvantageous to the people who have long been suffering from the environment destruction left by their past mining operation.”

The $20 million take-it-or-leave-it package was offered in September 2013 and is way lower than the $100 million claim for damage that Marinduque is demanding from Barrick in a 2006 lawsuit.

Barrick is the global gold-mining firm that purchased Placer Dome Inc., the former parent company of Marcopper Mining Corp. that shut down operations following the mine tailing spill.

In 1996, the plug of the Tapian pit of the Marcopper mine gave way and unleashed approximately 200 million tons of toxic mine tailings into the Boac River.

Nearly 20 years after the disaster, the damaged areas have yet to be fully rehabilitated.

Larracas said the rally started early morning. Protesters came from four assembly points in the town and converged at a covered court at the municipal hall of Boac.

At least 1,000 people attended the rally. “They all came despite the rain,” he said.

Aside from Boac, the towns of Gasan and Buenavista, through separate resolutions, called for a renegotiation of the deal, while the rest of the towns in the province—Mogpog, Sta. Cruz and Torrijos—have kept quiet.

On March 8, 2011, the Supreme Court also issued a writ of kalikasan in favor of three residents who sued Placer Dome Inc. and Barrick on behalf of the victims of the mining disaster. With a report from Jofel Joyce Lancion, Inquirer Southern Luzon