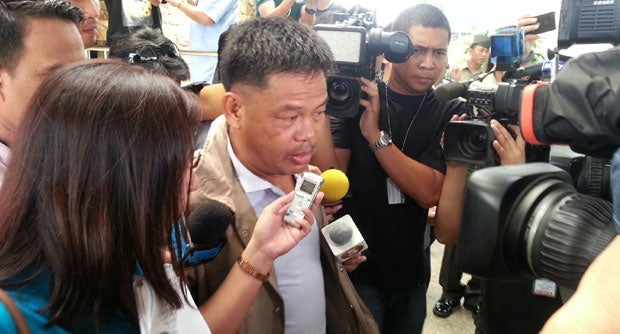 MANILA, Philippines—Saying that their son, former Cadet First class Aldrin Jeff Cudia, could not move on because he had been placed on indefinite leave by the Philippine Military Academcy (PMA), father Renato Cudia and mother Filipina plan to file Tuesday another petition in the Supreme Court seeking to have Aldrin honorably discharged from the PMA and given his diploma.

The entire Cudia family surfaced at a press conference on Monday at the Public Attorney’s Office (PAO) to break their week-long silence on the younger Cudia’s dismissal from the PMA and his subsequent appeal.

The elder Cudia said it was impossible for his son to “move on” without an honorable dismissal or a diploma as he had completed all the academic requirements, so their only recourse was to seek the high tribunal’s intervention in the matter.

An honorable discharge is given to members of the military service who have met or exceeded the required standards of duty performance and personal conduct, or have completed their tours of duty.

“We gave (President Aquino) a chance. We were silent for a week. He asked for one week to find a solution and address our concern but nothing happened. Up to now we are still waiting,” the older Cudia said.

PAO lawyer Howard Areza said the agency would assist Filipina Cudia in filing a petition for intervention on behalf of her son after it had obtained new evidence, particularly sworn statements, that would attest to the absence of due process in the cadet’s dismissal from the PMA.

Areza told reporters that Filipina’s petition was intended to be merged with her husband’s request on March 10 that asked the Supreme Court to  issue a temporary restraining order and stop the implementation of the PMA dismissal.

The petition also sought the ex-cadet’s inclusion in the PMA Siklab Diwa Class and asked that he be commissioned as an ensign in the Philippine Navy, in effect nullifying the PMA Honor Committee’s decision declaring him guilty of violating the Honor Code. The petition described the verdict as an exercise of grave abuse and discretion as well.

Areza said that Filipina Cudia’s petition was intended to “challenge the PMA decision to dismiss her son from the academy” and to ask the Supreme Court to order that benefits and privileges lawfully due a PMA graduate be conferred on the young Cudia.

“We are seeking the intervention of the Supreme Court for justice, preserving the honor and dignity of Cadet First Class Cudia and seeking redress for the baseless pronouncement of his guilt by the honor committee,” the PAO lawyer said.