US landslide death toll doubles to 8 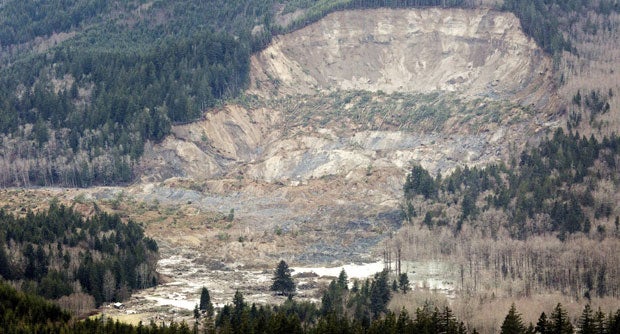 In this aerial photo taken Saturday, March 23, 2014, a massive mudslide is shown in between the towns of Darrington, Wash., and Arlington, Wash. The slide killed at least three people and many people are still unaccounted for, and authorities said Sunday that searchers were flying over the one-square-mile mudslide in helicopters. AP/The Seattle Times, Marcus Yam

ARLINGTON, Washington — Searchers found five more bodies Sunday in the sludge of a massive landslide in the northwestern state of Washington, bringing the death toll to at least eight from the wall of debris that swept through a small riverside neighborhood.

More people remained missing, and authorities said the number was “fluid.” Earlier Sunday, they said it was at least 18, but that count came before additional bodies were discovered.

Crews were able to get out to the muddy, tree-strewn area after geologists flew over in a helicopter and determined it was safe enough for emergency responders and technical rescue personnel to search for possible survivors, Snohomish County Fire District 21 Chief Travis Hots said Sunday evening.

“We didn’t see or hear any signs of life out there today,” he said, adding that they did not search the entire debris field, only drier areas safe to traverse.

Despite that, Hots said crews were still in a “search and rescue mode. It has not gone to a recovery mode at this time.”

He said the search would continue until nightfall, when conditions would become too dangerous.

Several people, including an infant, were critically injured in the mudslide that hit Saturday morning about 55 miles (88 kilometers) north of Seattle. About 30 homes were destroyed.

Rescuers’ hopes of finding more survivors had been buoyed late Saturday when they heard people yelling for help from within the debris field, but they were unable to reach anyone. The mud was so thick and deep that searchers had to turn back.

The slide wiped through what neighbors described as a former fishing village of small homes — some nearly 100 years old.

Some of the missing may have been able to get out on their own, authorities said. The number unaccounted for could change because some people may have been in cars and on roads when the slide hit, Hots said.

Officials described the mudslide as “a big wall of mud and debris.” It was reported about 60 feet (18 meters) deep in some areas.

Authorities believe the slide was caused by ground made unstable by recent heavy rainfall.

The slide blocked the North Fork of the Stillaguamish River. With the water pooling behind the debris, authorities worried about downstream flooding and issued an evacuation notice Saturday. The water had begun to seep through the blockage Sunday afternoon, alleviating some concerns.

John Pennington, director of Snohomish County Emergency Management Department, said there were concerns that the water could break downstream, as well as back up and flood areas upstream.

Shari Ireton, a spokeswoman for the Snohomish County sheriff’s office, said Sunday that a total of eight people were injured in the slide.

A 6-month-old boy and an 81-year-old man remained in critical condition Sunday morning at Harborview Medical Center in Seattle. Hospital spokeswoman Susan Gregg said two men, ages 37 and 58, were in serious condition, while a 25-year-old woman was upgraded to satisfactory condition.

Bruce Blacker, who lives just west of the slide, doesn’t know the whereabouts of six neighbors.

“It’s a very close knit community,” Blacker said as he waited at an Arlington roadblock before troopers let him through. There were almost 20 homes in the neighborhood that was destroyed, he said.