Lawyers, the gov’t needs you 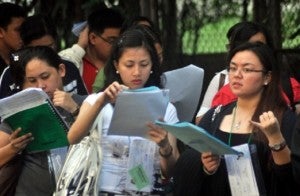 MANILA, Philippines—Because more prosecutors want to be judges, the government is short of up to 700 lawyers to do the job of prosecuting cases, according to Justice Secretary Leila de Lima.

Speaking before an event organized by Finex last week, De Lima said there were more positions for prosecutors under Republic Act No. 1007, or the National Prosecution Service Act.

But the vacancies now run from 600 to 700 prosecutors due to a “fast turnover” of government prosecutors, many of whom apply for judicial positions, which, De Lima said, was their “normal career path.”

“From a prosecutor, they would vie for either a metropolitan trial court or regional trial court position. So while we haven’t yet filled the existing vacancies, there are more vacancies because more prosecutors want to be judges…,” she said.

The justice secretary said the “major challenge” for the government is to have more prosecutors.

“We simply lack warm bodies in the discharge of our mandate,” she said.

De Lima said the salary for prosecutors ranged from P40,000 to P70,000 a month.—Christine O. Avendaño