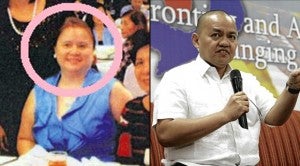 The ad hoc committee, chaired by Justice Marvic Leonen, has served its invitation to Lerma at her last known address and also through other persons who know her personally, the Supreme Court public information office chief, lawyer Theodore Te, said in a media briefer.

Several columnists, including the Inquirer’s Ramon Tulfo, earlier exposed the activities of an alleged influential “fixer” named “Ma’am Arlene” in the judiciary, particularly in the Court of Appeals and the Manila courts. Lerma is being tagged in news reports as Ma’am Arlene.

Judges and appeals justices are known to issue temporary restraining orders (TRO) that adversely affect or benefit litigants. The columnists claimed TROs as well as decision reversals can be bought.

Ma’am Arlene also gave away hotel accommodations and expensive bags during the campaign period for the election of officers of a judges’ association, presumably in return for favorable decisions.

The Bureau of Immigration reported last October that Lerma has left the country.

Te said the committee has held 13 sessions and received sworn testimony from 32 resource persons, among them members of the judiciary and Supreme Court officials and employees and other government officials.

The committee has also received many documents, photographs and reports as well as information and tips, many of them coming from official as well as unofficial sources.

The committee is in “close coordination” with the National Bureau of Investigation, which also provides information about the alleged corruption and other anomalies perpetrated by Ma’am Arlene.

“All these documents, information and tips have allowed the committee to also pursue independently other sources of information,” Te said.

The other members of the committee are retired Supreme Court justices Alicia Austria-Martinez and Romeo Callejo Sr.

“With its regular meetings, the committee has been able to keep to its timetable and hopes to submit a preliminary report to the court en banc on the issues covered by its mandate for the court’s action during the summer session,” Te added.

As agreed upon by the committee members during its organizational meeting, the proceedings and deliberations are confidential but on record.

“This is to allow greater freedom on the part of resource persons to speak and to give the committee members the flexibility to probe more deeply,” Te explained, adding that the committee, through his office, may give public updates on the investigation when necessary.