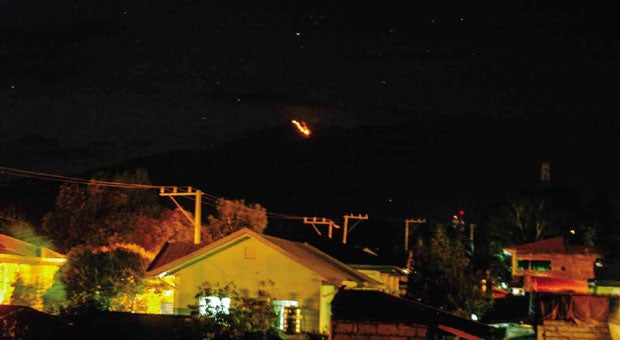 BURNING PEAK Forest fire lights up the peak of Mt. Banahaw on Wednesday night as seen from a village at the foot of the mystic mountain. Environment officials fear for some species of plants and animals endemic in the era. The fire is believed to have been started by backpackers who intruded into the restricted area. JEROME QUEJANO/CONTRIBUTOR

LUCENA CITY—A forest fire has damaged a large area near the adjoining peaks of Mt. Banahaw and Mt. San Cristobal and may have destroyed endangered plants and animals in a place some local sects consider holy, officials said on Thursday.

The fire on the western slope of the volcanic crater facing Sariaya town in Quezon province was believed to have been started by backpackers who ignored a ban on trekking on the 2,158-meter-high Mt. Banahaw, which is closed for preservation.

Arnulfo Juan, director of the Department of Environment and Natural Resources (DENR) in Calabarzon (Cavite, Laguna, Batangas, Rizal, Quezon), told a morning news conference here that at least 50 hectares of cogon were burning atop Mt. Banahaw and 100-140 ha of grassland within a reforestation area on the 1,380-m Mt. San Cristobal were ablaze.

Fire Officer 2 Marx Pranada, Bureau of Fire Protection chief in Quezon, said local fire fighters had no capability to fight a forest fire of that magnitude.

By midday, however, other DENR officials in the region said the fire appeared to have died out on its own, apparently stopped by the wet forest.

Ernesto Amores, head of the Sariaya Municipal Disaster Risk Reduction and Management Council, said the fire was first spotted around 6 p.m. on Wednesday, with the observation of smoke from Maharlika Highway.

Fire fighters still had not reached the blaze some 18 hours after it was first observed, said Elmer Bustamante, another official of the Sariaya disaster council.

But television aerial pictures showed the area covered with white smoke late Thursday afternoon, the fire having burned out without fire fighters getting there.

Pangan said intruders sneaked into the restricted area under cover of darkness.

Banahaw and San Cristobal have a combined land area of about 10,000 ha, but there are only three forest rangers on the western slope in Quezon, she said.

“Ideally, the huge area should have 12 forest rangers,” she added.

Amores said the fire was the first on the western slope of Banahaw.

Wildlife officials of the DENR said Banahaw’s forest, including the protected zone, was home to scores of animal species found only in the Philippines, including a species of cloud rat discovered only in 2004.

Officials said they still had to receive a report of the extent of the damage to the mountain caused by the forest fire.

Ivan Herzano, a project officer of the private group Foundation for the Philippine Environment, said that despite access restrictions, forest rangers lacked the capability to track people who may be illegally entering the protected area.

Herzano’s group has recently completed a 60-ha reforestation project on the mountain, which has protected zones that are off limits to human habitation, as well as “multiple-use zones” on its lower slopes reserved for locals.

On Tuesday, grass fire struck the slope of San Cristobal on the side of San Pablo City, destroying 10 ha of cogon and parts of a reforestation project.

The Protected Area Management Board, a multisectoral body tasked with the enforcement of Republic Act No. 9847, which designates Mt. Banahaw and Mt. San Cristobal protected areas, has closed Banahaw to trekkers up to February 2016 to protect the gains from reforestation that has been going on since 2004.

Camping, praying and other religious activities are allowed only in designated areas near the foot of the mountain.—With a report from AFP