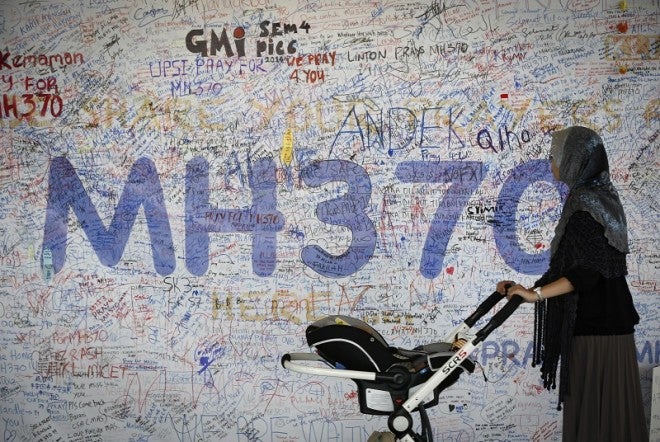 A woman pushes her baby cart in front of the messages board for passengers aboard a missing Malaysia Airlines plane at Kuala Lumpur International Airport in Sepang, Malaysia, Wednesday, March 19, 2014. New radar data from Thailand gave Malaysian investigators more potential clues Wednesday for how to retrace the course of the missing Malaysian airliner, while a massive multinational search unfolded in an area the size of Australia. (AP Photo/Vincent Thian)

KUALA LUMPUR, Malaysia — It took more than a week, but both sides of Malaysia’s bitterly contested political divide are now sparring over the disappearance and hunt for the missing jetliner, a possible distraction for a government already under fire for its handling of the crisis.

The opposition is attacking the government, relishing in the international criticism that has been directed at leaders unused to such scrutiny. Pro-government blogs are focusing on the pilot’s support for opposition leader Anwar Ibrahim, hoping that suspicions against the former will discredit the latter.

Malaysian politics have been defined in recent years by the government’s attempts to stop the rise of opposition parties chipping away at its five-decade grip on power. Anwar, the opposition movement’s main leader, spent six years in jail on corruption and sodomy charges, a campaign that Western rights groups and governments say is politically motivated.

The missing plane has reopened this fault line because the pilot, Zaharie Ahmad Shah, is a supporter of Anwar and the uncle of his daughter-in-law. It got extra traction locally when the Daily Mail, a British tabloid, described Zaharie as a “political fanatic,” and used this to buttress a theory that he was involved in the plane’s disappearance.

Investigators have said they believe the Malaysia Airlines plane was deliberately diverted during a March 8 flight from Kuala Lumpur to Beijing, and that someone with aviation skills was likely at helm of the Boeing 777. They are investigating Zaharie’s background closely, but have publicly or privately voiced no suspicions against him. No evidence has publicly come to light incriminating the pilot.

On Tuesday, Anwar defended Zaharie, and accused the government and the media that it controls of using the issue to slander him. In the same statement, Anwar went on to raise questions over the government’s competence in its handling of the crisis.

No government minister has attempted to link Anwar to the issue, but supportive blogs and papers have mentioned the link. On Tuesday, a Malaysian journalist asked Defense Minister Hishammuddin Hussein, who is also acting transport minister, whether investigators planned to question Anwar in relation to the probe.

“We have been very consistent — the government’s main focus from Day One has been on search and rescue. We didn’t bring this up,” said Hishammuddin, who is a cousin of Prime Minister Najib Razak. “This issue is above politics.”

Malaysia has a history of political persecution, but violence between the government and the opposition has not been part of political landscape, unlike in some other Southeast Asian countries, including the Philippines and Indonesia.

Last year, an opposition coalition led by Anwar won the popular vote for the first time, but it didn’t get enough seats to oust the ruling party. But the day before the jetliner went missing, Anwar was sentenced to five years in jail for a second sodomy offense, preventing him from running in a by-election later this month.

Sports Minister Khairy Jamaluddin accused Anwar of bringing up the issue of Zaharie’s support for his party himself so he could “play the victim.”

“Enough of this, Anwar,” he said on his Facebook page. “There is no need to spin or lie. You are the one who is not respecting Captain Zaharie.”

James Chin, a Malaysia expert at Australia’s Monash University, said the issue was typical Malaysian “mudslinging” around Anwar, who is a polarizing figure. It wouldn’t hurt the opposition unless it was proven that Zaharie played a role in the plane’s disappearance, he said.

“If he is, then the opposition will suffer a major backlash,” he said.

Lim Kit Siang, another opposition leader, criticized the government for holding a formal briefing on Tuesday evening exclusively for its legislators. He said given the national importance of the challenge facing the country, all Parliament members should have been involved.

“They should have got everyone on board,” he said. “This is not helpful.”

Zaharie appears in many respects typical of the new Malay middle class that is turning away from the ruling party and looking for a political alternative in Anwar and his People’s Justice Party. His house is in a gated community, his daughter studied abroad and he is an active social media user.

Anwar’s platform of greater freedom of speech, more democracy, an end to corruption and nepotism, and reform of the government-run businesses that dominate much of the economy resonates with many in this class, much of which used to reliably vote for the Malay-dominated ruling party.

Zaharie’s friends and People’s Justice Party members say he was a supporter of the party, but not an especially active one. Sivarasa Rasiah, a party leader, said the 53-year-old would occasionally attend party events, sometimes bringing rice cakes he had cooked.

“The fact he is a member of the party is really completely irrelevant to the issues about the missing plane,” he said. “I would advise the Daily Mail to be cautious about using local police sources for that kind of information. There are elements within the Malaysian police, especially the special branch, who are very political.”

7 leading theories on disappearance of Flight 370

Read Next
Ukraine bows to Crimea seizure, plans for pullout
EDITORS' PICK
Ahead of ONE: Full Blast II, Mongkolpetch warns Elias Mahmoudi: ‘Watch out for my fists’
G7 rivals China with grand infrastructure plan
Rare earth metals at the heart of China’s rivalry with US, Europe
PNP, PDEA destroy P25.8M worth of marijuana in Kalinga
Alex Eala wins Grand Slam on Independence Day: ‘I hope I made my contribution to the country’
Kai Sotto continues to inspire Filipinos by sharing his passions and stories with Smart Prepaid
MOST READ
Chel Diokno, Bro. Eddie, Ate Vi decline 1Sambayan 2022 poll nomination
1Sambayan bares nominees for president, vice president in 2022 polls
Groups slam Duterte ‘surrender’ to China
G7 rivals China with grand infrastructure plan
Don't miss out on the latest news and information.