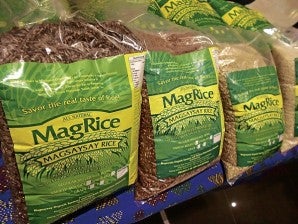 PACKS of MagRice, the organic brown rice produced by farmers in the rice-producing town of Magsaysay. GERMELINA LACORTE

MANILA, Philippines—The local council has urged major fast-food chains and restaurants in Quezon City to include brown rice in their menus.

On Monday’s regular session, the councilors confirmed the resolution on third and final reading making the request official and enjoining Mayor Herbert Bautista to promote organic brown rice as a healthy alternative.

The council endorses the thinking that brown rice is the healthier staple over the generally preferred white variety and should be offered as an option to local diners in restaurants and fast food joints, citing the state policy of promoting the health, and instilling health consciousness among the citizenry.

Brown rice is produced when only the outermost layer of palay or the rice husk is removed in the milling process unlike the white variety where the next layers, the bran and the germ, are removed, along with them several vitamins and dietary minerals.

The book features 23 traditional and contemporary brown rice recipes including fried rice, rice toppings, snacks and desserts that could be made available in the restaurant menus.

They also pointed out that the Philippine Rice Research Institute and the Nueva Ecija Medical Society have been promoting brown rice because of its high fiber content, which would help reduce the risk of heart disease and diabetes in persons by providing good metabolism and improving digestion.

Other groups, Oxfam Philippines and Dakila-Philippine Collective for Modern Heroism, have also made a similar call to large fast food chains in the country under their “ Brown Rice: the Good Food Campaign” launched in last year’s World Food Day.