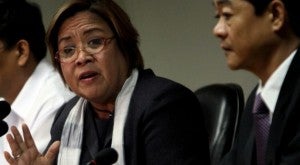 MANILA, Philippines—Justice Secretary Leila De Lima on Wednesday said they will look into the affidavits of former officials of the state-owned National Agri-Business Corporation (Nabcor) in connection with the alleged media payoffs using pork barrel funds.

“We will evaluate first the sworn statements of the Nabcor whistleblowers,” De Lima told reporters Wednesday in a text message.

She said they will have copies of affidavits of whistleblowers Rhodora Mendoza and Vic Cacal within the week.

The two former officials said that checks from a Nabcor account at the United Coconut Planters Bank in Pasig were issued separately to news anchor Erwin Tulfo and radio anchor Carmelo “Melo” del Prado Magdurulang. A separate payment was allegedly made to a radio-television personality worth P2-million.

Read Next
Angara, 2 media men may be invited to Senate ‘pork’ scam probe
EDITORS' PICK
EDITORIAL: To a bike-friendly future
The Best Tech Gifts For The 2022 Holidays
Is it safe to talk politics again at family gatherings? ‘The Reconciliation Dinner’ shows us what that’s like
House energy committee chair Arroyo bats for cheap electricity
vivo’s coming to town to grant wishes with more holiday promos
Pagasa: Warm, sunny Sunday in most parts of PH
MOST READ
LOOK: Vhong Navarro transferred to BJMP detention facility in Taguig
The Elephant Man in the Senate
Posh village as ‘shabu’ haven
LOOK: Zanjoe Marudo bonds with Ria Atayde, her family
Don't miss out on the latest news and information.