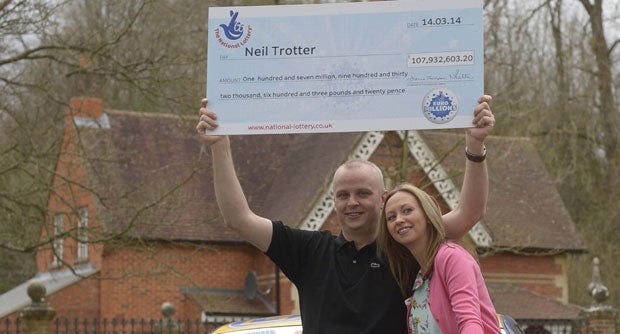 In an undated handout picture released by Camelot on March 18, 2014, Neil Trotter (L) and Nicky Ottaway (R) celebrate their 107.9 million-GBP jackpot win in the EuroMillions draw at Wotton House, Dorking, Surrey, on March 18, 2014. A car mechanic from Britain revealed on March 18 he had predicted he would be a multi-millionaire “this time tomorrow” just hours before he won a 107.9 million GBP lottery jackpot. AFP / CAMELOT / ADY KERRY

LONDON – A car mechanic from Britain revealed on Tuesday he had predicted he would be a multi-millionaire “this time tomorrow” just hours before he won a £107.9 million lottery jackpot.

Neil Trotter, 41, from Coulsdon in south London, said he had told staff at his father’s office on the day of the Euromillions draw Friday that he was feeling lucky.

At around 10:30 pm that night, he went “white as a sheet” when he learned he was the single ticket holder to scoop the massive jackpot worth 128.8 million euros or $179.2 million.

After becoming the fourth-biggest lottery winners in British history, Trotter and his partner Nicky Ottaway, 33, celebrated modestly with two bottles of beer.

Trotter now plans to give up work and indulge his passion for touring car racing. Ottaway resigned from her job on Tuesday.

At a press conference with her, Trotter said: “I’ve always thought I’d win big and I’d had a good feeling all week.

“On Friday evening we were sitting at home when I checked the time and thought the draw must have taken place by now.

“I took out my ticket to check the winning numbers and amazingly one by one they matched. I told Nicky, ‘I’ve done it, I’ve won the lottery’.”

“But she told me to shut up and to stop being an idiot.”

“Apparently I turned white as a sheet and couldn’t sit still, I kept walking round the house — I didn’t know what to do with myself.”

“I got her to check the numbers with me and she started screaming!”

He said his father initially accused him of being drunk when he told him.

Trotter said the couple intended to start splashing their cash on a new house and cars.

They have been looking at new cars since the win, but their first foray into the world of the super-rich left them feeling uncomfortable.

“People give you the look as if you haven’t got the money to buy them,” he said.

His girlfriend said she had a similar experience when she enquired about a handbag.

“I just asked the sales guy how much it was. He said ‘£1,100’ but he’d already turned his back and was walking away from us.”

Asked if she thought the salesman regretted his actions now, Ottaway said: “I hope so, yeah!”

The mechanic, a keen amateur racing driver, said he now had the financial means to indulge in his hobby.

“It’s my passion and I wouldn’t mind a guest driver slot if I can find the right car,” he said.

The instant riches from the Euromillions have not always brought the winners happiness.

Adrian and Gillian Bayford, the second-biggest British Euromillions winners, separated last year and blamed the stress of their £148 million jackpot for the collapse of their nine-year marriage.

Winner of P12.7B Multilotto to be known Saturday