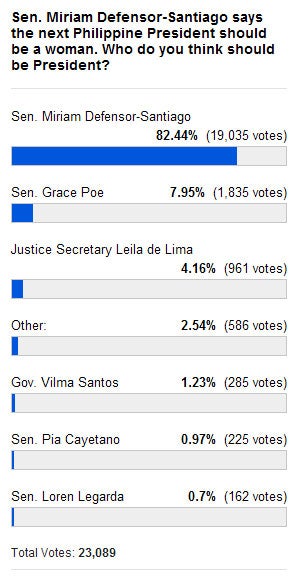 MANILA, Philippines—She said it, and her people responded.

After Senator Miriam Defensor-Santiago, arguably the most popular gadfly in the Philippine senate, said that a woman should lead the country in 2016, an overwhelming support from Netizens went her way.

In an unofficial poll by INQUIRER.net regarding Santiago’s statements, the senator got the queen’s share of votes—as of Tuesday night—with 19,035, or 82.44 percent, of the total 23,089 responses.

As any other queen, all other competitors humble beneath her throne with the closest, Sen. Grace Poe, only having a measly 1,835 supporters, or 7.95 percent of the whole realm.

Netizens, who have not found any suitable lady to lead the country simply gave their own suggestions which under the “others” and got 586 responses, or 2.54percent.

Santiago said in March 11 that a woman should lead the country in 2016 as to meet the gender equality in the Philippines.

Santiago on presidential bid: ‘I already have a job’

Santiago: Next president should be female to meet PH gender equality goal