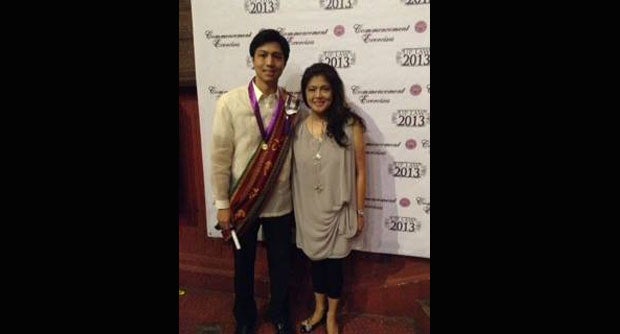 MANILA, Philippines— A grandson of former President Ferdinand E. Marcos, who topped the Bar examinations in 1939,  is among the 1, 174 who passed the 2013 bar examinations.

Ferdinand Richard Michael Manotoc, the second child of Ilocos Norte Governor Imee Marcos, graduated from the University of the Philippines (UP) College of Law.

The late strongman Marcos, who is also a graduate of the UP law school, topped the Bar examinations during his time with a 98. 80 passing percentage.

The late President’s rating was the highest score ever attained in the Bar exams but questions from various sectors prompted the Supreme Court to re-calibrate his score to 92.35 percent.

“Proud of my 4th generation UP Law son, Atty. Michael Manotoc, for passing the Bar exam. Even if I didn’t want him to be a lawyer, I am so happy he is one now,” Gov. Marcos told reporters Tuesday.

UP’s Nielson G. Pangan topped the Bar with the score of 85.8, the first law graduate from UP to top the exam after eight years.

Did you know: First bar exam in PH

Read Next
Bar Exams Top 3 is son of trike driver, ‘tiger mom’
EDITORS' PICK
PH logs 7,302 new COVID-19 cases — DOH
Taguig exceeds daily COVID-19 vaccination target of 6,800 individuals for 3 days
Robredo urges supporters: Don’t think we’re the only ones who are good
Alex Eala wins Grand Slam on Independence Day: ‘I hope I made my contribution to the country’
Ahead of ONE: Full Blast II, Mongkolpetch warns Elias Mahmoudi: ‘Watch out for my fists’
Kai Sotto continues to inspire Filipinos by sharing his passions and stories with Smart Prepaid
MOST READ
China cautions G7: ‘small’ groups don’t rule the world
Leni vs. Sara
PH to have cloudy, rainy Monday — Pagasa
1Sambayan to nominees: Stick to word of honor
Don't miss out on the latest news and information.