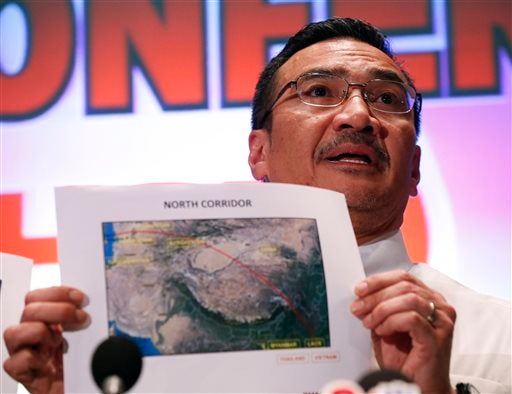 Malaysia’s acting Transport Minister Hishamuddin Hussein shows maps of northern search corridor during a press conference at a hotel near the Kuala Lumpur International Airport, in Sepang, Malaysia, Monday, March 17, 2014. Twenty-six countries are involved in the massive international search for the Malaysia Airlines jetliner that disappeared on March 8 with 239 people aboard. They include not just military assets on land, at sea and in the air, but also investigators and the specific support and assistance requested by Malaysia, such as radar and satellite information. AP

BEIJING— China’s strident calls for Malaysia to divulge all it knows about flight MH370 are in stark contrast to its own history of secretiveness when calamities have struck, such as after the 2008 Sichuan earthquake, analysts say.

The call followed more than a week’s worth of scathing editorials in China’s state-run media demanding greater openness from Kuala Lumpur and Malaysia Airlines.

“Unless transparency is ensured, the huge international search operation can never be as fruitful as we hope and expect,” read one of several Xinhua commentaries.

“When faced with catastrophe, honesty is human beings’ best solution to finding a chance to prevent tragedies happening again,” it continued.

Yet at Monday’s regular Chinese foreign ministry press briefing, spokesman Hong Lei declined to provide details when faced with a series of questions regarding China’s role in the search.

Could China rule out the possibility of the missing aircraft entering its airspace?

Were any of the 153 Chinese passengers aboard the aircraft being investigated?

Was China searching on land as well as on sea?

Were any searches being conducted in the restive western regions of Tibet and Xinjiang, where satellite data suggests the aircraft could have flown?

Hong declined to give factual answers, saying that “the relevant search operation is going on, and we will cooperate actively with the Malaysian side to carry on with the search efforts”.

It was not until a day later that Xinhua cited China’s ambassador to Malaysia Huang Huikang revealing that Beijing had indeed begun searching for the missing plane in Chinese territory.

Chinese authorities last week released satellite photographs of three floating objects they said could have been related to the missing flight, but offered no explanation for the images being made public three days after being taken.

Chinese media have been instructed to follow Xinhua’s lead in reporting the incident, according to insiders — a regular occurrence.

The International Federation of Journalists said in a statement: “It is deeply regrettable that Chinese authorities continue to use methods such as these to control the flow of much-needed information, particularly for those desperately awaiting updates on the investigation.”

Beijing’s reticence is not surprising, analysts say, noting that for the countries taking part in the search, geopolitical sensitivities are as much at play as humanitarian considerations.

The initial operations in the South China Sea were “a peacetime test of many of the military functions that would be critical in the event of a conflict”, James Brown, a military fellow at the Lowy Institute for International Policy in Sydney, told AFP.

The militaries in question will have been “closely watching each other’s performance, and wary of exposing any vulnerabilities — to each other, and to their own domestic political audiences”, he added.

But Beijing also has a long record covering up any incidents that could be seen as embarrassments for the ruling Chinese Communist Party, tightly restricting information and blocking any attempts at independent verification.

Arrests instead of answers

Chinese campaigners questioning whether corruption was to blame for thousands of children being killed as their schools collapsed in the 2008 Sichuan earthquake were met not with answers, but with beatings and arrests.

Three years later, after 39 people were killed and nearly 200 injured in a deadly high-speed train crash near the eastern city of Wenzhou, authorities triggered a national outcry when they ordered the wreckage be buried in order to “protect the country’s technological secrets”.

More recently, state-controlled media were ordered not to publish independent reports on a fiery October crash in Tiananmen Square or this month’s mass stabbing attack at Kunming train station.

Plane crashes on Chinese soil have typically been treated by authorities as highly sensitive, with reporters given limited access to the crash sites and, in years past, blocked entirely from reporting on them.

Beijing uses its “state secrets” law to silence dissidents and block the release of unfavourable reports on China’s environmental and other conditions, campaign groups say.

It uses a “vague, circular, and overbroad definition of what constitutes a state secret”, and is part of “the policy of information control at the heart of the state secrets system’, US-based Human Rights in China said earlier this month.

Chinese Internet users have increasingly criticised the official news agency Xinhua, state broadcaster CCTV and other outlets for failing to produce the kinds of scoops that non-Chinese media have in the 11 days since MH370’s disappearance.

“Judging from this incident, it’s still the western media that are the most responsible and reliable at reporting the news,” wrote one user of Sina Weibo, a Chinese version of Twitter.

“Meanwhile, Malaysia and China have only exposed their irresponsible bureaucracy, their mistake-riddled news reports, and a state-run press corps that just jumps on the bandwagon and reprints others’ articles.”

China searching for missing MH370 jet on own territory—Xinhua