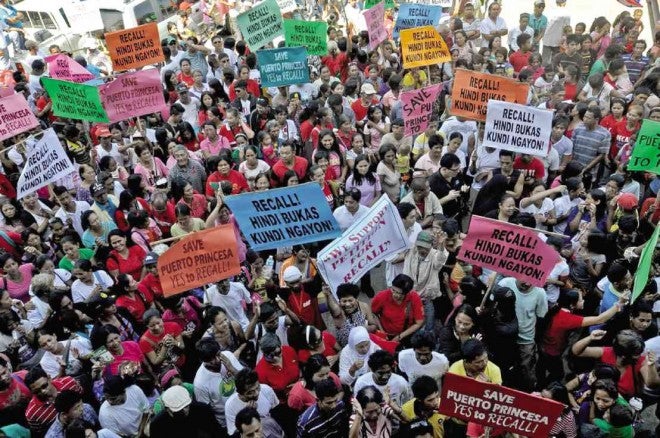 RESIDENTS hold up placards calling for the recall of Puerto Princesa Mayor Lucilo Bayron as they join the filing of the recall petition in front of the Commission on Elections office in Barangay (village) San Pedro in Puerto Princesa City, Palawan province. RICHARD A. REYES

PUERTO PRINCESA CITY, Philippines—A petition seeking to recall incumbent Mayor Lucilo Bayron was filed at the Commission on Elections (Comelec) office here Monday. The petition cited a “breach of trust,” declining tourism activities and a deteriorating peace and order situation as its bases for the recall.

The petitioners, led by Muslim leader Al Babao and political lobbyist Joey Mirasol, both known supporters here of former Mayor Edward Hagedorn, were joined by hundreds of other Hagedorn followers who massed in front of the Comelec offices on Monday morning to dramatize their bid.

Bayron, in a press conference also on Monday, accused the petitioners of “fabricating justifications” to support their bid.

The petitioners submitted to the Comelec copies of a petition signed ostensibly by a sufficient number of registered voters, as required by the election law. The Comelec has received the petition and is due to announce a schedule for the verification of the signatures.

The petitioners, in media interviews, blamed the Bayron administration for mismanagement and inaction, leading to a decline in the city’s erstwhile robust tourism sector.

Bayron dismissed the petition and denied the public claims made by tourism regional director Becky Labit, a former city tourism officer, that the city’s tourism has been on a decline.

“Until now, Puerto Princesa City has remained peaceful and orderly. There is no such thing as a crime wave as they claim. And this is in spite of them leaving us with huge financial obligations,” Bayron said.

Bayron accused Hagedorn of being behind the recall petition. “They cannot accept that they lost in the last elections,” he said.