Education and the ‘Muslim problem’ 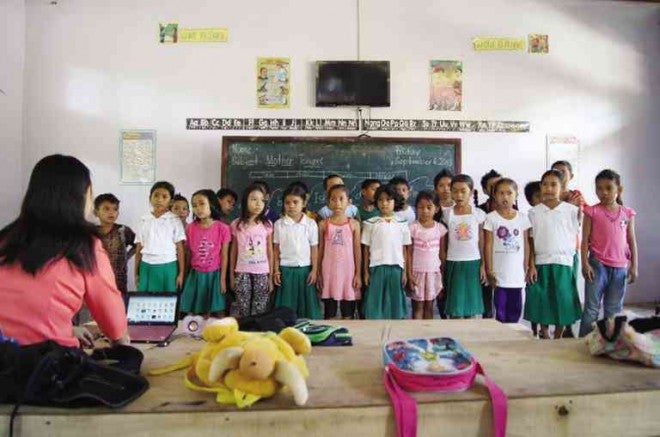 SINGING students in one of the newly renovated Klasrums ng Pagasa

The first time I heard the term “Muslim problem” used in a conversation, I could not help but ask the stranger sitting next to me in a coffee shop what he meant and why he used “Muslim” and “problem” in the same sentence.

The question stunned us both, so I apologized and left, fearing that if he engaged me in a discussion, I would not really know what to say, except to note that it was wrong.

In school, very early on, I learned of Muslim Mindanao and was told that, apart from religion, it distinguished itself from the rest of the country because it was home to the rebel Abu Sayyaf.

The only other time in my youth that I encountered Muslims was in the early 1990s when cellular phone sales boomed and people from Marawi City sold their wares in Divisoria and Greenhills.

I was always warned that they were out to cheat me and, if I offended them, I could get kidnapped.

When 9/11 happened, the world changed for the worse.

I was so young and the Internet was not what it is today. It gradually unfolded to become the space where more opinions could be heard. White people generally labeled Muslims as terrorists because of their religion. 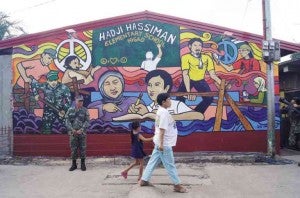 Mural at a school in the Jolo town proper

I thought we would be spared this disease in Southeast Asia, seeing as our neighbors and many of our own people are Muslim. But prejudice prevailed and we learned to accept it as funny when our fellow Filipinos are called Bin Laden just because they grow beards and have gone to Hajj—something so few of us knew anything about.

My only question then was: How could anyone distinguish a rebel from an ordinary citizen? Even the world’s elite intelligence agencies struggle to answer the question, as they admit to lacking resources to make a verification.

It was reported that when Camp Abubakar fell, Estrada celebrated with a lunch of roast pork and beer. The roast pork was meant to anger the Muslims because every Muslim must be a terrorist, right?

When I first went to Brunei as an 18-year-old student, I wept at the sound of the adhan (call to prayer) sung early in the morning. I did not know what the words meant but they resonated with me.

I met my first set of Muslim friends then and gradually learned that Islam was more than what I thought it was. My affection grew for these friends who prayed more than I did but still listened to punk rock, read a slew of books and held the same bold opinions as I did, a liberal Catholic.

I learned I could argue for the right of women to their own bodies and, in the same breath, applaud my Muslim girlfriends for choosing to wear their hijab.

I strongly argued for all of these positions, although I had met so few Filipino Muslims because I felt there was something fundamentally wrong with the way we were taught about “these people.”

Last year, I visited Sulu province for the first time with a group of volunteers to build classrooms. Marine Battalions 2, 6, 9 and 11 hosted the Klasrums ng Pagasa team. They ensured our safety, fed us and indulged my curiosity.

On one of our visits to Camp Bud Datu, I asked a soldier to escort me to the shrine of Rajah Baginda, the first Muslim to rule Sulu. On our way through snaking trails, I asked him about his life as a soldier. Did he understand what he was doing or did he feel, as I assumed, that he was a pawn on a bigger man’s board?

Of course, I was wrong. He was a Marine. He volunteered to do this and whatever “this” was, he did it because of his sense of duty and service to his country.

I was careful not to mock him because, after all, he was risking life and limbs. He was also completely in charge of my life at that moment. But I risked angering him because I needed to know: Is war really worth everything to a soldier? How do you truly know who the enemy is?

I told him how I felt about the all-out war. I asked him if there was meaning there. He was already a soldier then and he remembered the time as if it were only yesterday.

Suddenly there was no more talk about service to the nation. He described the hardships faced by both civilians and soldiers.

I tried to get him to give details, to speak as if we were actually there, at that time. In a softer tone, he recalled his fear, saying the hairs on the back of his neck often stood during those days.

We said nothing afterward. What was there to say?

My stubborn friends and I continue to build schools in Sulu, erecting structures in the hope that more students will attend school if it is there. We offer students their portraits so that they will always know and appreciate who they are.

We partner with the Marines because they are the only image the Tausug have of the Philippine state. We strive to remind each Filipino Muslim in Sulu, especially the young, that they have not been forgotten.

We refuse to believe that peace in the region is merely a question of politics. In our experience, it is about human development. It is a question of whether we have invested enough in the education and health of our Filipino brothers and sisters in the south. It is also an invitation to learn more about the Tausug, one of the ethno-linguistic groups in Mindanao. 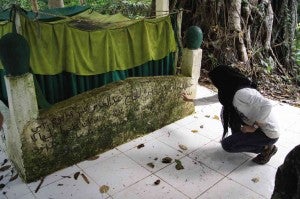 Today, I browsed through the textbook of my 11-year-old niece to see if anything had changed since I was last in school. Sadly, I found that only one paragraph on a page in our entire history as a nation was dedicated to Mindanao. The index had nothing on Islam and Muslims.

We continue to be taught that “these people” do not exist.

Nastasia Tysmans is a teacher, writer and community worker. She is a full-time volunteer for Klasrums ng Pagasa. E-mail her at [email protected]  or tweet her through @nashtysmans.