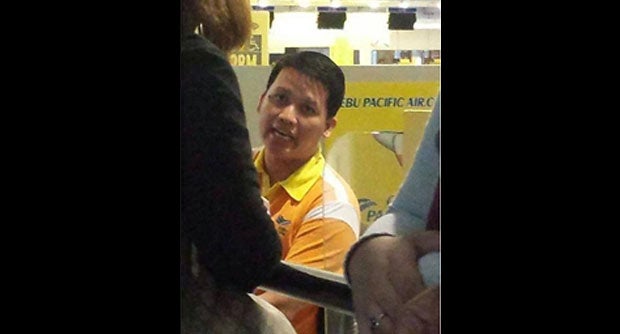 Cebu Pacific airlines ground staff Mark Rotanal refused to board a 12-year-old boy with a congenital disease due to a damaged passport. The boy was set to have an operation in Vietnam the next day. Cebu Pacific has since re-booked the boy’s flight free of charge. Screengrab from Facebook user Richell De Guzman’s account.

MANILA, Philippines – When a Cebu Pacific manager refused to board a child in need of an operation abroad, netizens were quick to call the airlines “heartless.”

Now, the airlines – known for its slogan “Every Juan Flies!” – scrambled to live up to its motto.

In a Facebook status Monday midnight, the airlines said its Guest Services Team contacted the passengers this morning and “provided all necessary assistance so they could push through with their flight.”

“We are looking into what happened and will follow due process. At the same time, we will be in touch with the affected passengers to ensure that their concerns are properly addressed. We sincerely regret the inconvenience this has caused them,” Cebu Pacific said.

It made a statement after a Facebook status accusing the airlines for being “heartless” went viral.

A concerned Facebook user Richell De Guzman posted on Facebook that on March 15, Saturday night, she saw a certain airline ground staff Mark Rotanel supposedly prevented a 12-year-old boy from boarding after he found out the passport was defective.

The child’s passport was slightly loose along its spine, a picture posted by De Guzman showed.

The child was supposed to be operated in Vietnam the next day to treat his hollowed chest, the status read.

In a Philippine News Agency report, the mother was identified as Regin De Guzman Palileo who said they were scheduled to board Cebu Pacific flight 5J-751 Saturday night when the airline ground staff blocked them.

Palileo has filed a complaint before the Manila International Airport Authority-Customer Relations Center over the incident.

The issue was referred to the Department of Foreign Affairs which said the passport has no defect. The DFA then issued a temporary passport for the boy on Sunday. The three left for Vietnam Sunday night with Cebu Pacific waiving rebooking charges.

In the viral Facebook status, De Guzman said Palileo was “very frustrated because the manager of Cebu pacific shouted that he’s the manager and he has the right not to make them fly because he found some defect in the kid’s passport.”

“But the passport looks okay and has (a) little fold. How can that manager be so heartless knowing that the kid will be operated the next day?” she wrote.

“(The) mother was pleading (that) one of the adult passengers be left behind and allow the kid to fly. But the manager just yelled at them and made them move in the side and let other passengers go ahead,” De Guzman added.

She also wrote that the manager supposedly said it is not Cebu Pacific’s fault and that their tickets may be forfeited as it is a promo ticket.

“(W)hat kind of service was that? (T)his is insane and inhuman. I hope those family are ok(ay) now. Anyone from Cebu Pacific, have a heart!” the status read.

The manager also said they cannot rebook their flight after they both missed the plane.

Cebu Pacific said it has contacted Vietnam immigration authorities an arranged for rebooking of the passengers.

“We pray for her son’s successful operation,” the airlines said.

The status has garnered almost 25,000 shares and over 6,000 likes since it was posted Sunday. Most of the Facebook commenters hit the manager for alleged improper handling of the passengers.

“Your manager is a front-line representative of your airline and his actions are disgraceful, if not utterly abominable that reflect most poorly on your image and customer commitment,” added user Rick Bella.