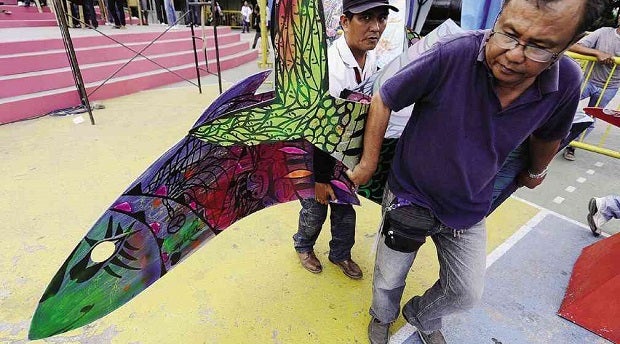 GIANT colorful renditions of Dagupan “bangus,” which are made of iron roofing sheets, are on display during the annual Bangus Festival in 2012. EV ESPIRITU/INQUIRER NORTHERN LUZON

DAGUPAN CITY—At least 10,000 kilograms of bangus (milkfish) will be grilled here when this city holds a street party next month for this year’s Bangus Festival celebration, a city government official said.

Edwin Aguirre, Bangusan street party coordinator, said at least 1,000 metal grills, measuring a meter each, would be lined on a 3-kilometer stretch of the  Dawel-Pantal-Lucao Road during the event.

Participants will pay P2,500 for each grill package consisting of 10 kg of bangus, a pair of tongs, a chef’s hat, apron and salt.

The original plan was to distribute only 5 kg of bangus per grill but Mayor Belen Fernandez had increased it to 10 kg, he said.

The street party is the main event of the annual festival, which will begin on April 1 and end with the Pistay Dayat (Sea Festival) celebration on May 1.

The festival, which began in 2002, was organized as a marketing strategy for this city’s main product, bangus, said to be the world’s tastiest.

“We will be using new grills, and if they will [buy] two grills, we will provide them with a tent to protect them in case it rains,”  Aguirre said.

He said that during the street party, different artists and bands would perform in eight stages set up in different areas.

Aguirre said this year’s festival would  include the Festivals of the North, a street dancing competition for different provinces in northern Luzon.