Santiago on Aquino: Independent mind, not an awful manager 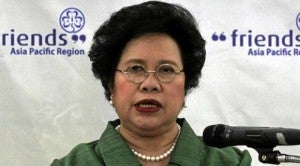 MANILA, Philippines—Senator Miriam Defensor-Santiago came to the defense of President Benigno Aquino III, saying the fact that he ignored inputs from well-meaning allies didn’t mean he was an awful manager, only that he had an independent mind.

Santiago on Friday disagreed with Sen. Sergio Osmeña III’s observation that Mr. Aquino was a good and honest man but a poor executive.

“Definitely, President Aquino is not a hawk.  But it is so facile to say that he is a dove. He’s not that either.  I think what characterizes him is his independence of mind,” Santiago said when asked about her own assessment of Mr. Aquino’s management style.

Osmeña on Thursday said President Aquino was an “awful manager” after the Chief Executive ignored his suggestion to fire Energy Secretary Jericho Petilla for being preoccupied with politics instead of focusing on his job as the country’s top executive on energy concerns.

Osmeña, the chair of the Senate committee on energy, is a known ally of President Aquino.

“I will be very careful in criticizing a president because I have close firsthand observation of how difficult it is to make a decision when you are faced with a certain set of facts, which are not capable of control, they’re all beyond your control,” Santiago said.

“So you have to own up to your own decisions and assume responsibility no matter how fearful the outcome might be.  That is why President Aquino is taking his own time in effect,” she added.

“He has to live with himself. He has no more political future and that I think entitles him to some degree of prudence when he is making important decisions particularly on the membership of his official family, his Cabinet, who are each his alter egos,” Santiago said.

“They speak and they act as if they were the President.  So politicians cannot come along and charge the President with coddling another politician just because there’s been no agreement on whether that politician should remain in office or not,” she added.

“I would say that I would view the matter with sympathy from the perspective of President Aquino,” Santiago said.

Malacañang acknowledged that the President and Osmeña did not see eye-to-eye on the best course of action to solving power supply woes but was not ready to pick a fight with the senator from Cebu.

“You know, one disagreement does not unmake or unravel a particular relationship. So, you know, as I said earlier, we’re open to having these (sort of) discussions,” Palace deputy spokesperson Abigail Valte said in a briefing.
RELATED STORIES