Timeline: the hunt for flight MH370 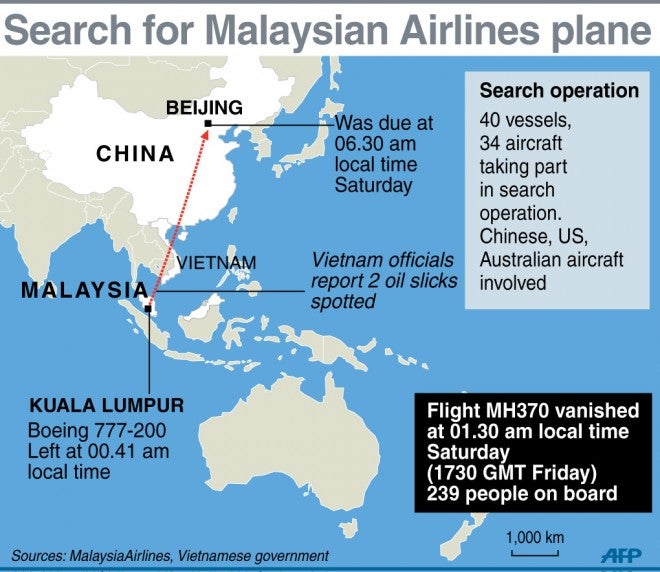 HONG KONG – The search for Malaysia Airlines flight MH370 entered its sixth day on Thursday, with the focus on Chinese satellite images showing possible debris in the South China Sea near where the plane lost contact.

Here is a timeline of major developments since the Boeing 777 vanished early Saturday with 239 people on board, en route from Kuala Lumpur to Beijing:

— Malaysia Airlines says the plane lost contact with air traffic control at around 1:30 am (1730 GMT Friday), about an hour after take-off from Kuala Lumpur International Airport. Initially, authorities had put the last contact time at 2:40 am.

— Vietnam says the plane went missing near its airspace. It launches a search operation that expands into a huge international hunt in the South China Sea, involving dozens of ships and aircraft from countries including the US and Japan.

— Tearful relatives of the 153 Chinese passengers gather at a Beijing hotel, criticizing Malaysia Airlines over a lack of information.

— Late evening, Vietnam says its planes have spotted two large oil slicks near the plane’s last known location and sends boats to the area, but they find no sign of it.

— It also emerges that two passengers on board were traveling on EU passports that were stolen in Thailand, fueling speculation of a terrorist attack.

— Malaysia says it is probing a possible terror link to the jet’s disappearance. The US sends FBI agents to assist in the investigation.

— Malaysia says the plane may have turned back towards Kuala Lumpur, for no apparent reason.

— Late Sunday, a Vietnamese plane spots possible debris in the sea near Tho Chu island, part of a small archipelago off southwest Vietnam. It proves a false alarm.

— Authorities double the search radius to 100 nautical miles (equivalent to 185 kilometers) around the point where MH370 disappeared from radar.

— China lashes out at Malaysia, saying it needs to speed up the investigation.

— In the afternoon Malaysia sends ships to investigate a sighting of a possible life raft, but a Vietnamese vessel that gets there first finds only flotsam.

— Chemical analysis by Malaysia disproves any link between oil slicks found at sea and the missing plane.

— Boeing experts join the investigation. The US aircraft maker says it is giving technical advice to a team from the US National Transportation Safety Board that is already in Southeast Asia to offer assistance.

— The search area now includes land on the Malaysian peninsula itself, the waters off its west coast, and an area to the north of Indonesia’s Sumatra island – all far removed from the flight’s scheduled route.

— Interpol names the two men travelling on stolen passports as Iranians Seyed Mohammed Reza Delavar, aged 29, and Pouria Nourmohammadi, 18. Malaysian officials say they believe the pair are illegal immigrants and that people-smuggling is the likeliest explanation for the identity fraud.

— Malaysian police say they are focusing on theories including a hijacking, sabotage or psychological problems among those on board, but stress there is still no evidence to support any scenario.

— Malaysia expands the search zone to include the Malacca Strait off the country’s west coast and the Andaman Sea north of Indonesia, hundreds of kilometres away. The total zone now stands at 27,000 square nautical miles (over 90,000 square kilometres) – an area roughly the size of Portugal.

— Malaysian air force chief General Rodzali Daud says an unidentified object was detected on military radar north of the Malacca Strait early Saturday, less than an hour after the plane lost contact, but says it is still being investigated.

— At a heated news conference, Malaysian officials deny that the search is in disarray after China says conflicting information about its course is “pretty chaotic.”

— It emerges that US regulators warned months ago of a “cracking and corrosion” problem on Boeing 777s that could lead to a mid-air break-up. But US officials say their spy satellites detected no sign of a mid-air explosion when the plane lost contact.

— China says one of its satellites has detected three large “floating objects” at a potential crash site in the South China Sea. It says it is analysing the images, which were taken on Sunday.

— Malaysia dispatches an aircraft to investigate.