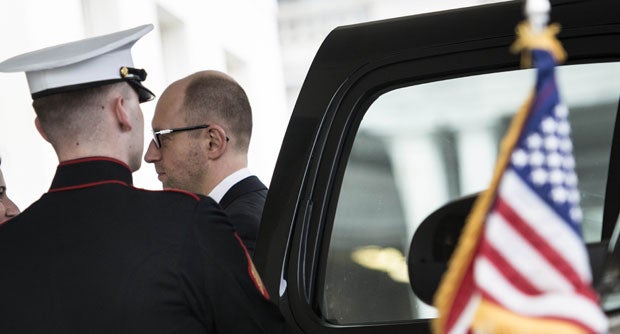 KIEV – Leading world powers in the Group of Seven warned Wednesday against Russia’s “annexation” of Crimea as the Ukrainian premier prepared to seek US President Barack Obama’s help against the Kremlin’s expansionist threat.

The first meeting between Obama and Ukrainian Prime Minister Arseniy Yatsenyuk comes with the nation on the EU’s eastern border in danger of breaking apart when the predominantly ethnic Russian region holds a Moscow-backed referendum Sunday on switching over to Kremlin rule.

Ukraine’s acting President Oleksandr Turchynov said his heavily outnumbered army would never try to seize back the Black Sea peninsula from Russian troops who made their land grab days after the February 22 ouster in Kiev of pro-Kremlin leader Viktor Yanukovych.

“We cannot launch a military operation in Crimea, as we would expose the eastern border and Ukraine would not be protected,” Turchynov said in an interview with AFP.

But Turchynov also said Russian President Vladimir Putin had so far resisted intense international pressure and refused all contacts with Kiev aimed at resolving the worst breakdown in East-West relations since the Cold War.

Putin’s growing diplomatic isolation intensified when the Group of Seven (G7) industrialized nations issued a joint call on Russia “to cease all efforts to change the status of Crimea contrary to Ukrainian law and in violation of international law.”

“The annexation of Crimea could have grave implications for the legal order that protects the unity and sovereignty of all states,” said the statement from countries accounting for more than 60 percent of global wealth.

EU foreign ministers are now expected to discuss punitive measures against senior Russian officials at a meeting in Brussels on Monday.

The 28-nation bloc’s leaders will then meet for a March 20-21 summit that German Chancellor Angela Merkel said could witness the signing of an historic EU-Ukraine accord whose rejection by Yanukovych in November sparked the deadly protests against his rule.

“We agreed to sign the political part of the association agreement with Ukraine as soon as possible, probably at the next EU summit,” Merkel said.

Washington said Moscow could still avoid punishments if it showed a willingness to soften its stance on Crimea during talks in London on Friday between US Secretary of State John Kerry and Russian Foreign Minister Sergei Lavrov.

“We will offer certain choices to Foreign Minister Lavrov and through him President Putin in the hopes, and I think the hopes of the world, that we will be able to find a way forward,” Kerry told lawmakers.

Russia’s first military involvement in a neighboring nation since its brief 2008 war with Georgia has sparked an explosive security crisis and exposed previous rifts between Western allies over ways to deal with Putin’s undisguised efforts to rebuild vestiges of the Soviet state.

Washington has already imposed travel bans and asset freezes on Russians held responsible for violating the territorial integrity of the culturally splintered nation of 46 million people.

But the European Union – its financial and energy sectors much more dependent on Russia than those of the United States – has only threatened tougher measures after taking the lighter step of suspending free travel and broad economic treaty talks.

French President Francois Hollande told Putin in a phone conversation that any annexation of Crimea would be “unacceptable” but said there was still time to prevent a “dangerous” escalation.

Yet the international community’s almost unanimous rejection of the referendum’s legitimacy has done little to slow Russia’s attempt to redraw Europe’s post-war borders by absorbing a region that was handed to Ukraine as a “gift” when it was still a Soviet republic in 1954.

Russia’s parliament is due on March 21 to consider legislation to simplify the procedure under which Moscow can annex a part of another country that has proclaimed independence – as Crimean lawmakers did Tuesday.

The White House is leaving no doubt about the message it intends to send to Russia with the visit of Yatsenyuk – a premier Moscow considers illegitimate.

He will be greeted by Obama in the Oval Office – a symbol of US power – like any other foreign leader and also meet Vice President Joe Biden after he had rushed back from a trip to South America to join the talks.

The White House said Yatsenyuk’s reception was meant show it believed that Kiev’s interim government has been playing a responsible role in the crisis.

Yatsenyuk will also use the chance to iron out details of a $35-billion (25-billion-euro) aid package he says his nation’s teetering economy needs to stay afloat over the coming two years after being mismanaged by Yanukovych – now living in self-imposed exile in Russia.

Ukraine ‘will not attack’

Ukraine’s soldiers and marines have won plaudits from Western leaders for refusing to open fire against Russian troops and Kremlin-backed militia who have encircled their bases and kept their ships from going out to sea.

Turchynov said that as commander in chief he understood fully the futility of launching an all-out war against a much larger invading force that had nuclear weapons and tens of thousands of additional troops stationed just inside Russia.

“They’re provoking us to have a pretext to intervene on the Ukrainian mainland… (but) we cannot follow the scenario written by the Kremlin.”

The self-declared leaders of Crimea who are staging the referendum with Putin’s backing but have no recognition from Kiev have already said they expect an overwhelming “yes” vote in the predominantly ethnic Russian region favour of joining Kremlin rule.

But the leader of Crimea’s Muslim Tatars – deported en masse by Stalin in 1944 and now making up just 12 percent of the local population — has already called for a boycott of the vote.

Crimean Tatar leader Mustafa Dzhemilev told Ukraine’s Channel 5 television that he spoke by telephone with Putin on Wednesday and “expressed doubts over the decision to organize a referendum and its legitimacy.”