Witness says he may have seen ‘burning’ Malaysian Airlines plane 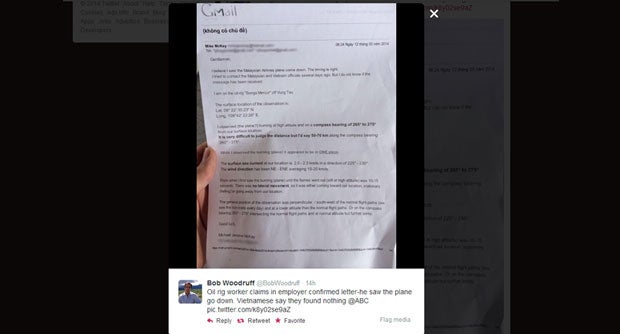 MANILA, Philippines – With most of the initial leads running dry, authorities remain clueless on what had happened to the missing Malaysian Airlines flight MH370.

But recent reports may lead people to believe that the plane had indeed crashed into the sea near Vietnam.

In addition to the suspected debris spotted through Chinese satellite images, an oil rig worker claimed he saw the “burning” plane go down.

Bob Woodruff, ABC News anchor, posted on Twitter a letter penned by Michael Jerome McKay, an oil rig worker based off the shores of Vietnam.

“I believe I saw the Malaysian Airlines plane come down. The timing is right…I observed (the plane?) burning at high altitude and on a compass bearing of 265° to 275° from our surface location,” he said in the letter.

McKay, who hails from New Zealand, added that the burning object “appeared to be in one piece.”

He is on board the oil-rig “Songa Mercur” off Vung Tau, a seaside city in Southern Vietnam.

Giving the coordinates of his location and other estimates on his observation, he said he tried to contact Malaysian and Vietnam officials but was not sure if they received the message.

Woodruff said he had confirmed the letter’s authenticity from the worker’s employer.

He was also able to contact Vietnamese officials who said they received the email but unfortunately found nothing in the mentioned area.