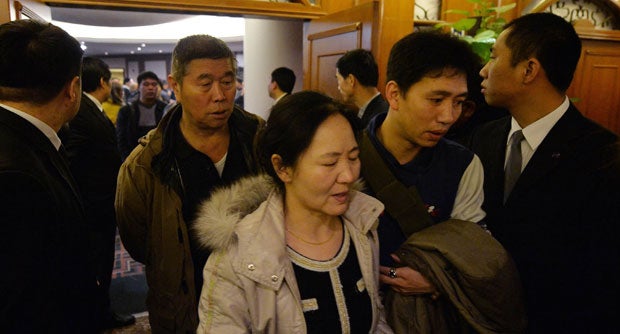 Relatives of passengers from the missing Malaysia Airlines Boeing 777-200 plane leave after a meeting with the Malaysian ambassador at the Metro Park Lido Hotel in Beijing on March 12, 2014. Malaysia’s air force chief said authorities have not ruled out the possibility a missing airliner inexplicably changed course before losing contact, but denied reports the jet had been detected far from its planned flight path. AFP

Iskandar Sarudin was speaking to passengers’ relatives and friends at a Beijing hotel. A total of 153 of the 239 people on board the aircraft are Chinese.

The flight from Kuala Lumpur to Beijing disappeared from radar screens early on Saturday without making a distress call and no confirmed wreckage has been found, despite a vast search.

The “alright, good night” comment from one of the pilots came as the flight switched from Malaysian to Vietnamese airspace, Singapore’s Straits Times newspaper quoted the ambassador as saying.

As confusion deepens over the search area and whether Malaysian military radar tracked the aircraft, he said “now is not the time” to reveal what information the military had supplied civilian authorities.

He also defended the crew, after an Australian television report that co-pilot Fariq Abdul Hamid, 27, violated airline rules in 2011 by allowing two young South African women into their cockpit during a flight.

Relatives told AFP the event had been “orderly”, in contrast to a meeting with Chinese officials on Monday, when reports said family members hurled abuse at government representatives.

Some attacked Beijing’s own response as the crisis entered its fifth day.

“I think the Chinese government needs to be more active with this,” said a man surnamed Zhang, whose daughter was on board, coming back from a business trip.

“After all, this is happening to Chinese people,” he added.

Chinese authorities have emphasized through state-run media that they are waging an “all-out effort” to locate the missing aircraft.

Seven Chinese ships are taking part in the search, with an eighth due to arrive Wednesday, according to the official Xinhua news agency.

But web users lashed out at a Xinhua picture showing the chief of China’s maritime search and rescue center sitting at a desk and speaking on the telephone.

“What decade is it, that they’re still taking these kinds of photos?! Is it to prove that the leaders are keeping busy?” asked one user.

“I have no other feeling but disgust,” wrote another.

Others expressed frustration with the search effort.

“It’s been nearly 96 hours since MH370 lost contact, and 10 countries have joined the search-and-rescue effort, but they still haven’t found any traces of the lost aircraft,” wrote one.

“The search continues, but if they ultimately don’t find any clues, what on earth do we call this incident?”

At the hotel, relatives said they were now ready to accept funds which the airline had earlier described as “comfort” money, provided during “difficult times”.

They had earlier asked for the terms to be reviewed, but one said: “I don’t think this is an issue any more for most of us.”

A copy of the acceptance form seen by AFP says: “The airline offers the money out of kindness and it will not offset any final compensation.”

Some of the family members have travelled to Malaysia to be closer to the search effort, but most have not.

“I am not sleeping or eating well,” said one. “I am not thinking of going to Malaysia. What can I do there? I would rather stay in my own country.”