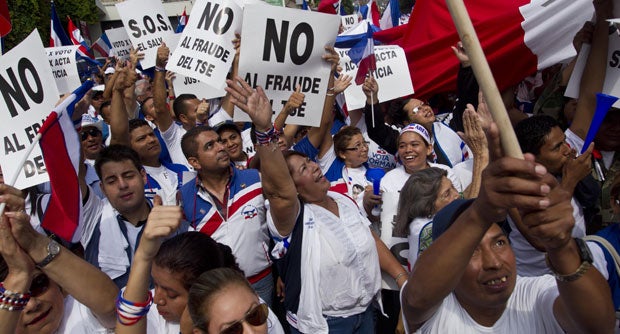 SAN SALVADOR, El Salvador  — Police blocked hundreds of supporters of the conservative candidate in El Salvador’s presidential election from reaching a hotel where electoral authorities were doing a final count Monday for the razor-thin runoff contest.

Supporters of Norman Quijano, candidate of the Nationalist Republican Alliance, or ARENA, carried signs reading “Vote by vote, tally sheet by tally sheet” to press their demands that all ballots from Sunday’s election be recounted.

Electoral authorities rejected a full recount, saying the law requires only that they review vote tally sheets from polling stations.

“This court must reject the request because it does not correspond with the mechanisms established by the legislature in the electoral code,” Eugenio Chicas, president of the Supreme Electoral Tribunal, said on national radio and television Tuesday night.

Quijano said he will recognize the results only if there is a vote-by-vote count overseen by international observers.

“Once they respect the law, and they get a definitive result, then we will respect it,” he said.

ARENA party president Jorge Velado said protesters would keep taking to the streets until authorities agree to recount every ballot. “The final count will be a joke if we don’t get a vote by vote recount,” he said.

All international missions that observed the election have said they were satisfied with how it was carried out.

The Organization of American States’ mission announced that it would stay in this Central American country of 6 million people until the final count is completed.

ARENA, a party long identified with the country’s landed elite, governed El Salvador for two decades until losing the presidency in 2009 to journalist Mauricio Funes, who ran under the banner of the former rebels known as the FMLN, although he had never fought for them in the 1980-92 civil war.

Sanchez Ceren, who promised to govern as a moderate if he became the first actual former guerrilla to lead El Salvador, had seemed to be heading for an easy victory heading into the election, with opinion polls saying he had a lead of 10 to 18 percentage points.

But ARENA managed to make serious inroads with a campaign warning that the leftists might take the country on the course of Venezuela, where economic troubles and high crime have fed weeks of protests against the socialist-led government.