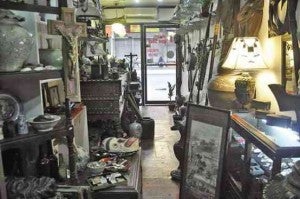 They used to be among Manila’s top attractions, but antique and arts shops especially in the Malate and Ermita districts had lost much of their charm through the years, with the last few holdouts yearning  for the good old days of selling old stuff.

Wilfred delos Reyes of Gallery Deus, which sells religious antiques and tribal artworks on Padre Faura Street, recalled how business was so brisk especially in the 1980s despite the stiff competition among the shops.

Back then, “almost a hundred percent of the shops on Mabini Street were into antiques,” Delos Reyes said. “Now there are less than 10 left.”

His own gallery, for example, could make around P1.2 million in just two days during that period, “but today it is hard for us to earn even P100,000 a month.”

Many shops started relocating to other cities like Pasay and Makati in the late ’90s, when rent got more and more expensive in Manila, pedestrian-friendly streets gave way to squalor, and crimes went on the rise.

Margarita Gomez, owner of the 35-year-old Golden Salakot Art and Antiques, noted that many of her customers now fear for their safety when visiting her place because of robbery-holdup incidents in the area.

“Foreigners also come to my shop complaining about robbery incidents right inside money changers (shops),” Gomez said, adding that these security concerns are shared by other small business establishments in the community once considered the “original Forbes Park” of the metropolis.

Other factors discouraging antique shop owners from continuing operation in the city are the various taxes and fees charged by the local government, such as the signboard fee, the sanitary inspection fee and even a separate charge for garbage-related services, said Delos Reyes, who shells out about P40,000 yearly for these collections.

Gomez echoed this complaint: “We are burdened with these kinds of taxes which, I think, we should not be paying because we do not use signboards for our shops and we are just renting space inside buildings here in Ermita.”

But steps are finally being taken by these loyal Manileños, who stayed put despite the growing challenges, to make their antique business “new” again.

Last month, the Ermita-Malate Business Owners Association (Emboa), entered into an urban renewal agreement with the Department of Interior and Local Government and the 16 barangays in the area, with special focus on the local antique and arts market.

“I am excited about the plans of Emboa and I am very willing to join their programs and activities in giving a boost to business in the area,” said Gomez, one of the remaining shop owners on Mabini.

Village officials were tasked to regulate the entry of pedicabs and other nonmotorized vehicles to maintain order on the streets, as well as the operation of street vendors.

“With the assistance of the police and the Manila Social Welfare Department, local government units are also responsible for prohibiting beggars and street dwellers in the tourist district at all times, and for keeping the streets of Ermita-Malate clean,” the business group said in a statement.

“Our group aims to revitalize the old glory of Ermita-Malate to attract more tourists. We therefore encourage everyone to share this dream with us and join our advocacy as it will benefit not just the people of Ermita and Malate,” said Emboa president Jeannette Macasieb, who also owns City Garden Hotel.

Ermita and Malate are also home to some of the historical and local tourism sites in Manila, like the Plaza Salamanca, Plaza Ferguzon, Remedios Circle, Plaza Rajah Sulayman, the Baywalk of Roxas Boulevard, and the Mehan Gardens.