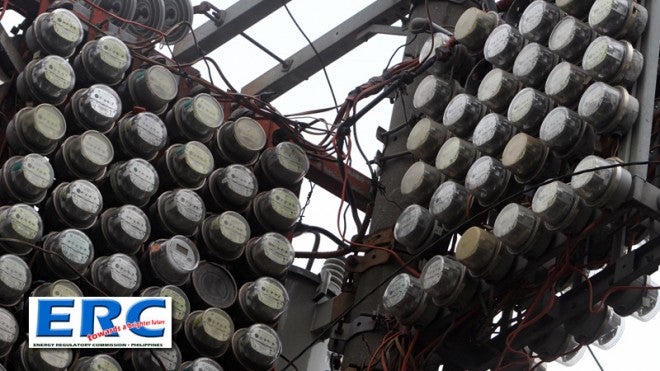 The Energy Regulatory has voided its earlier approval last December of the P4.15 per kilowatt-hour rate increase in generation charge that Manila Electric Co. had sought. FILE PHOTO

Malacañang on Tuesday endorsed the finding of the Energy Regulatory Commission (ERC) that prices on the Wholesale Electricity Spot Market (WESM) during the shutdown of the Malampaya gas pipeline late last year could not qualify as “reasonable, rational and competitive.”

Citing market failure, the ERC issued an order last week for the recalculation of the rates on the spot market.

The order in effect voided the ERC approval last December of the P4.15 per kilowatt-hour rate increase in generation charge that Manila Electric Co. (Meralco) had sought. It was the biggest increase sought by the country’s largest power distributor.

“We note the manifestation made (Tuesday) by the Energy Regulatory Commission to the Supreme Court regarding its March 3, 2014, order, ruling that the prices in the Wholesale Electricity Spot Market during the period covering the Malampaya shutdown could not qualify as ‘reasonable, rational, and competitive,’” Coloma said at a briefing in Malacañang.

“Hence, the ERC has ordered the imposition of regulated prices in lieu of the voided rates,” Coloma said.

Based on ERC’s own simulation, the WESM prices for the period may drop by “more than half.”

This means the WESM component of the generation cost and related charges will also go down. However, the actual WESM price will come from PEMC and the actual impact on Meralco bills will have to be determined by the distribution utility, the ERC said.

The ERC said the lack or failure of competition on the spot market “necessitates government intervention” to protect consumers from unreasonably high market prices.

“Government intervention in this case is a valid exercise of the state’s police power and can be done by the regulatory body to which the said power has been delegated and to intervene when the common good so demands,” the ERC said in its order.

The Supreme Court is hearing suits against Meralco in connection with its controversial increase of P4.15 per kWh to be implemented in three installments.

The ERC approved a staggered rate increase that was to have been collected in December, February and March, drawing public condemnation.

The Supreme Court, however, has issued a second 60-day TRO stopping the rate increase. The TRO ends in April.

Meralco wanted to collect a P4.15 per kWh rate adjustment from its 5.3 million customers to recover some P9.6 billion in power generation costs.

The rate increase stemmed from the shutdown of the Malampaya gas pipeline for maintenance from Nov. 11 to Dec. 10 last year.

A number of power generation plants also shut down during the period, creating a 45-percent shortfall in the average 6,000 megawatts that Meralco supplies to customers.

The shortfall forced Meralco to buy more expensive supply from the WESM and to pass on the cost to customers.

The shutdown of the pipeline also prompted plants that use the cheaper natural gas from Malampaya and supply power to Meralco to use more expensive fuel.

Lawmakers and the Department of Energy have accused industry players of collusion that led to the huge rate increase in Meralco’s generation charge.

Allies of the President in Congress have called on ERC Chair Zenaida Ducut and members of the commission to step down for not protecting the interests of the public when the agency approved the huge rate increase last December.

In the wake of the public outcry over the huge rate increase and call for ERC officials to step down, the ERC ordered a recalculation of electricity spot market rates for November and December 2013, which are billed in December and January, respectively.

At a briefing, ERC Director Francis Saturnino Juan said the more immediate impact of the order would be on Meralco’s pending petition to stagger the recovery of deferred generation costs for the January billing month over six months.

The generation charges and related taxes for the billing month of January were temporarily capped at P5.67 per kWh instead of the actual P10.23 per kWh in deference to the Supreme Court order on the December rates.

Of the P5.67 per kWh, generation cost alone accounted for P4.56 per kWh, of which P3.60 per kWh was attributed to spot market prices. The rest came from the cost of bilateral contracts and the fuel costs of three plants supplied by the Malampaya gas platform (which went on maintenance shutdown) that had to use more expensive alternative fuel.

The P4.15 per kWh rate increase in the December billing is the subject of an extended TRO by the Supreme Court.

Malacañang upheld the authority of the ERC, an independent and quasi-judicial regulatory body, to void the rates during the covered period.

“We note finally that the ERC exercised government’s police power to stop the imposition of ‘excessive, exorbitant, unreasonable, or very high prices’ of electricity in compliance with its mandate under the Epira (Electric Power Industry Reform Act of 2001),” Coloma said.

“We affirm government’s commitment to protect the citizens’ welfare by ensuring stable and reasonable electricity prices,” he said.

But Coloma hinted that the ERC might have found evidence of possible collusion and uncompetitive behavior among players of the power sector that was widely blamed by the public for the high power rates in the country.

“We note further that this ruling is the outcome of ERC’s inquiry into the behavior of market players during the Malampaya shutdown that preceded Meralco’s imposition of the questioned power rate adjustments,” he said.

Meralco said the pass-on charges in its customers’ electricity bills for December and January may drop as regulators ordered a recalculation of spot market rates.

“It (charges) will be lower for January. The question is how low,” Meralco first vice president William S. Pamintuan said at a briefing.

He said the impact on the January rates would be felt by customers first. For the December rates, the subject of the TRO, will be computed later when the case is resolved.

Meralco officials declined to give initial estimates of how much lower the bills would be, saying the company first would have to recompute the billing from PEMC.

“It’s all subject to final PEMC numbers. We have to wait for that to avoid confusing customers and then we can do whatever needs to be done. We can reflect adjustments in later bills, for example,” Pamintuan said.

He said Meralco would draw guidance from the ERC on how it could recover any of the adjusted rates.

Juan said the ERC had directed PEMC to recalculate the prices during the affected period since these appeared unjustified considering the many plant outages and “under-offers” of power capacity during the supply period.

The ERC also ordered PEMC to issue a new billing to Meralco seven days from March 11.

Juan said the ERC had found basis to intervene in the market after determining that the WESM prices during the period could not qualify as reasonable, rational and competitive due to the confluence of factors accompanying the tight supply situation.