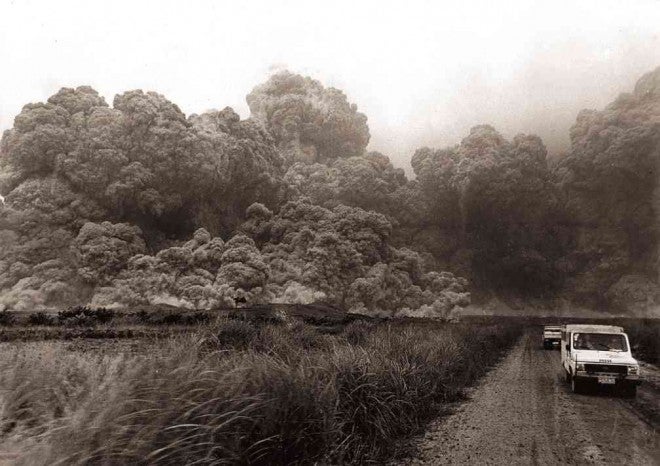 CLOUDS of volcanic ash from Mt. Pinatubo chase vans of photographers in this file photo of the eruption in June 1991. The debris spewed out by Pinatubo buried communities and cultural treasures in Central Luzon region.INQUIRER PHOTO

Volcanic sediments that rains washed down from the slopes of Mt. Pinatubo in 1995 buried not only Pampanga’s Bacolor town, the former Philippine capital, but also several of its literary treasures.

The works of poet-revolutionary and playwright Juan Crisostomo Soto, hailed father of Capampañgan literature and more known as Crissot, are kept in a vault submerged more than 20 meters beneath a monument bearing a marker reinstalled by the National Historical Commission of the Philippines in 2012.

According to Francis Musni, curator of the Center for Capampañgan Culture and Arts at the Don Honorio Ventura Technological State University (DHVTSU) in Bacolor, the information about Soto’s buried writings cropped up as the center mounted an exhibit in time for the poet’s 147th birth anniversary on Jan. 27.

“Very few people know that the original handwritten manuscript of his most popular work ‘Alang Dios! (There is no God!)’ is placed in a vault within the original base of the monument,” Musni said. 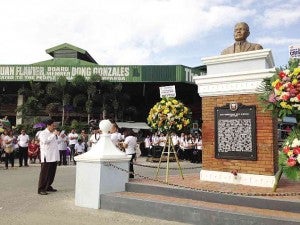 The play is over a century old, having been staged in Bacolor’s Teatro Sabina on Nov. 16, 1902, according to a note on a copy of a script in the possession of a Soto heir.

The monument was built by Aguman 33, a group of actors in Soto’s zarzuelas, in 1919 or a year after the death of the playwright-patriot.

In the reprint of Alang Dios! in her book, “Literature of the Pampangos,” Rosalina Icban-Castro wrote a footnote citing information by writer Juan Aguas that the zarzuela was “No. 28 on a list of [Soto’s] 48 works included in a manuscript prepared by members of Aguman 30.”

Aguas, she wrote, mentioned in his book that the “manuscript is in the vault inside the Soto monument in Bacolor.”

Musni said the monument could have been moved a few meters away from its original spot as workers in the local government considered road space. The monument stands at the junction of Barangay (village) Cabambangan and a national highway.

“We would have wanted to retrieve the manuscripts but that would entail big funds,” Musni said.

Aside from writing 50 zarzuelas and many poems, novels, short stories, comedies and essays, Soto fought in the 1898 revolution against Spain and the subsequent war against the Americans. He later founded and edited newspapers in Pampanga and Manila.

The center’s chair, Nestor Galura, said Soto inspired many later poets, playwrights and writers. “Unfortunately, many of his works were left unpublished, some only hand-copied or manually typewritten from handwritten manuscripts,” he said.

During the Jan. 27 event, the Teatro DVHTSU performed excerpts from “Alang Dios” and “Lidia.” The  Sapni ng Crissot (Heirs of Crissot) committed to work with the center in the observance of the 150th birth anniversary of the literary giant.