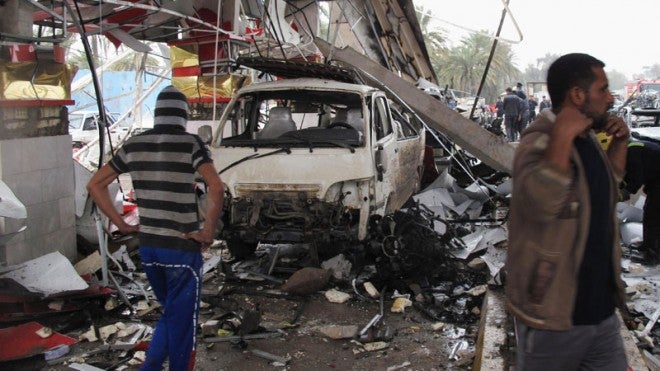 Civilians inspect the site of a massive bomb attack in Hillah, about 60 miles (95 kilometers) south of Baghdad, Iraq, Sunday, March 9, 2014. A suicide car bomber set off his explosive-laden vehicle at a security checkpoint in southern Iraq on Sunday, killing and wounding scores of people, police said. Iraq has seen a spike in violence since last April, with the death toll climbing to its highest levels since the worst of the country’s sectarian bloodletting in 2006-2008. The U.N. says 8,868 people were killed in 2013, and more than 1,400 people were killed in January and February of this year. (AP Photo/Str)

HILLA, Iraq — A suicide bombing at a crowded checkpoint south of the Iraqi capital killed 50 people and wounded more than 150, police and a doctor said Monday, raising the toll from the day before.

The bomber detonated an explosives-rigged vehicle during rush hour on Sunday, the first day of the working week in Iraq, at a checkpoint at the northern entrance to the city of Hilla.

Among the dead were five policemen and two state television employees. The blast also left 153 others wounded, according to the sources, who spoke on condition of anonymity.

An interior ministry statement said the bomber had used an explosives-rigged tanker truck in the attack.

Provincial police chief Major General Abbas Abouzaid was moved to police headquarters in Baghdad in the aftermath of the bombing, and was replaced by Major General Riyadh al-Khaikani, a police spokesman said.

Iraq has been hit by a year-long surge in violence that has reached levels not seen since 2008, driven principally by widespread discontent among its Sunni Arab minority and by the civil war in neighbouring Syria.

Analysts and diplomats have urged the Shiite-led authorities to reach out to disaffected Sunnis, but with elections due next month, political leaders have not wanted to be seen to compromise and have instead pursued a hard line against militants.

More than 170 people have been killed so far this month and upwards of 1,850 since the beginning of the year, according to AFP figures based on security and medical sources.