Napoles paying for her surgery–lawyer 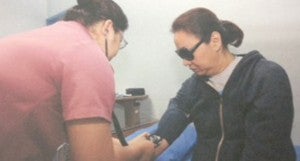 MANILA, Philippines—Taxpayers will not shoulder the medical expenses of detained alleged pork barrel scam mastermind Janet Lim-Napoles should she be allowed by the Makati Regional Trial Court to undergo surgery to remove a cyst in her uterus at posh St. Luke’s Medical Center in Bonifacio Global City.

This according to lawyer Bruce Rivera who said, “The family has been raising funds to have her hospitalized. This is contrary to the misconception that the government will be paying for her treatment.”

A hearing on Napoles’ motion “to undergo medical surgery and hospital confinement” is set for Tuesday in Makati RTC Branch 150 which is handling the serious detention case filed against her and her brother Reynald Lim.

Napoles’ lawyers insisted she be brought to St. Luke’s Medical Center, saying it had “the most advanced medical equipment in the country.”

They said that while her condition was not declared life-threatening by the doctors of the Philippine National Police who examined her, there was a need for her to undergo surgery to remove the cyst in her uterus.

“We will insist on St. Luke’s because we had a bad experience at the Camp Crame hospital,” Rivera said in a phone interview.

The lawyer said the equipment used for Napoles’ transvaginal ultrasound at Camp Crame during an exam on Feb. 26 was the old standard “2-D” (two-dimensional) whereas St. Luke’s uses a four-dimensional ultrasound machine.

Napoles wants to have her cyst-removal surgery at St. Luke’s Taguig