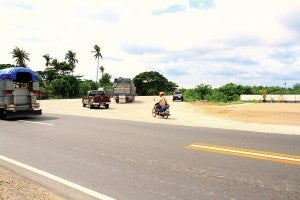 MANILA, Philippines—With a 2014 budget allocation of P129.41 billion, the Department of Public Works and Highways (DPWH) plans to rehabilitate the last 15,872 kilometers of gravel and unpaved arterial roads nationwide.

The amount is 67.7 percent of the agency’s total infrastructure program fund of P190.91 billion, according to a DPWH report, a copy of which was furnished the Inquirer by the agency’s Public Information Division.

The remaining P61.5 billion in capital outlays will go to major flood-control and other infrastructure projects in Metro Manila and the rest of the country.

This year’s budget for the rehabilitation of national roads and bridges is P28.48 billion more than last year’s, which was P110.93 billion.

Aside from the P129.4-billion funding, the government has set aside an additional P12.2 billion for the maintenance of roads and bridges and the installation of traffic lights and other road safety devices.

At par with Indonesia, India

With increasing budgetary support, the DPWH has expressed confidence the Philippines’ global ranking in terms of quality of roads would improve further from the current 87th place in the World Economic Forum’s Global Competitiveness Report.

The department noted the nation’s road quality index had improved from 2.8 to 3.4, which makes it at par with Indonesia and India.

“The Philippines is targeting to be in the 4 to 5 territory by 2016,” the last year of the Aquino administration, said the DPWH.

Last September, the WEF said that overall, the country’s competitiveness ranking had improved by six notches to 59th from 65th the previous year.

Among the 10 Southeast Asian nations included in the body’s report, the Philippines placed sixth in terms of competitiveness, ahead of Vietnam, Laos, Cambodia and Myanmar.

However, it trailed Singapore, Malaysia, Brunei, Thailand and Indonesia.

In the WEF’s 2012-2013 report, roads in the country scored a mediocre 3.4 on a scale of 1 to 7, with 1 being extremely underdeveloped and 7 extensive and efficient by global standards.

Of 139 countries worldwide, the Philippines ranked 113th for the overall state of its public infrastructure, with particularly low marks for the quality of its airports and seaports.

Public Works Secretary Rogelio Singson called the upgrading of the quality and safety of the national road network “one of the DPWH’s priorities.”

He referred to the network as the “most important infrastructure asset of the government.”

In a recent agency planning session, Singson ordered the “pavement of all remaining gravel roads; improvement of the capacity of existing roads through road-widening projects; construction of bypasses where road widening is not feasible; and improving the quality of national highways through tighter supervision and quality assurance during the roads’ construction stage.”

On bridges, he said that “investments shall focus on the maintenance, if not replacement, of those that can no longer be rehabilitated to improve their condition, and the replacement of timber and bailey bridges with concrete or steel structures.”

To ensure the longer life span of primary roads, the DPWH head called for the “implementation of better drainage projects along these roads.”