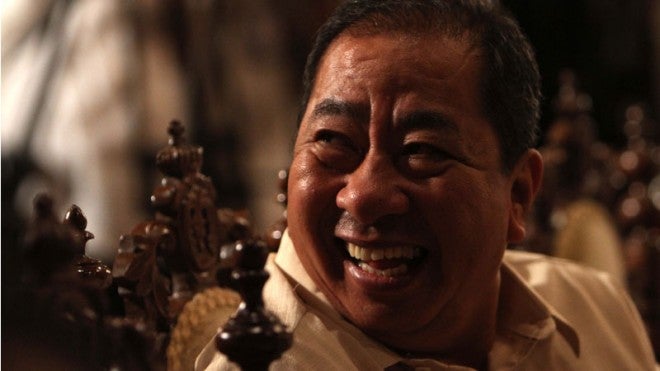 Lee has been charged with syndicated estafa, a nonbailable offense, for allegedly pulling off a scam involving members of the Home Development Mutual Fund (Pag-Ibig Fund) and the double sale of housing to obtain P7 billion from the agency for projects of his Globe Asiatique Realty Holdings Corp. in Bacolor town and Mabalacat City in Pampanga in 2008-2011.

The President made the inquiry in a text message to Oriental Mindoro Gov. Alfonso Umali, who claimed he made the phone call on the “request” of Lee’s lawyer, Gilbert Repizo.

Lee was arrested on March 6 at the Hyatt Regency Hotel and Casino in Ermita, Manila, two years after he had gone into hiding.

“According to Gov. Boy Umali, he called PNP Director General Alan Purisima upon the request of Attorney Gilbert Repizo, who is a province mate and who knows Gov. Boy Umali,” Communications Secretary Herminio Coloma said in Filipino over Radyo ng Bayan on Sunday.

“Also, according to Governor Umali, he has already explained the matter to President Aquino after [the President] asked him about it through a text message.”

But Coloma could not say if the President bought the explanation of Umali, who is also the treasurer of the ruling Liberal Party.

Quoting Umali, Coloma said Repizo wanted to “clarify the basis for the arrest of Mr. Lee because as far as his camp knew, the Court of Appeals already has a decision in favor of his client.” The lawyer was referring to the supposed order quashing the arrest warrant against Lee.

In the phone call, Coloma said, Purisima replied that the arrest warrant remained “valid and that’s where the conversation ended.”

Binay, head of the Housing and Urban Development Coordinating Council and chair of the Pag-Ibig Fund, said the influential people went to PNP headquarters on Friday to make the police release Lee on the grounds that the Court of Appeals had made a favorable decision on the housing developer.

The Vice President said the arrest warrant issued by Judge Amifaith Fider-Reyes of Pampanga Regional Trial Court (RTC) Branch 42 was still valid because the Supreme Court had yet to decide on the government petition to review the appellate court’s ruling in favor of Lee.

The appellate court granted Lee’s petition to stop the hearing of the syndicated estafa case in the Pampanga RTC and to quash the arrest warrant. But the Pag-Ibig Fund and the Department of Justice appealed the ruling to the Supreme Court.

Malacañang said it was hopeful that the arrest of Lee would “pave the way for the speedy resolution of the cases he is involved in.”

Coloma said the arrest could provide “peace of mind to the victims of the allegedly anomalous sale of houses by his [Lee’s] company.”

Documents from the Pag-Ibig Fund showed that Globe Asiatique paid certain people to sign documents, using these to take out housing loans from the agency.

Home buyers also discovered that the units they bought in Xevera subdivisions in Mabalacat and Bacolor were in the names of other people, many of whom cannot be located, were dead or were not qualified to be Pag-Ibig members. Insiders called these people “special buyers” to distinguish them from “real buyers.”

Binay has called on the authorities to transfer Lee to the Pampanga provincial jail, saying no special treatment should be given to the developer.

Lee is held in a small room of the Central Luzon office of the National Bureau of Investigation in the City of San Fernando, also in Pampanga. The room has an electric fan, television and a wooden bed without a mattress.

His food is supplied by visitors, including former Pampanga Rep. Carmelo “Tarzan” Lazatin.

One of Lee’s lawyers, Willie Rivera, said his client was “more secure” while held at the NBI Central Luzon office. His lawyers cited threats to his life when they asked the court to commit Lee to the NBI jail.

Binay said Lee’s arrest was the “first step” for victims in attaining justice.

“Now, we must apply the rule of law and not give special treatment to the accused. Lee should be put in an ordinary provincial jail just like any accused,” the Vice President said in a statement on Sunday.

Lee, president of Globe Asiatique, denied that he went into hiding after Judge Reyes issued a warrant for his arrest and the arrest of four others for syndicated estafa in May 2012.

“[We] appealed in the Court of Appeals. It took two years before the decision came out. I think it is not easy to endure detention for two years knowing very well that you did nothing wrong,” he said.

Lee was referring to resolutions that dismissed the charges against him and his coaccused—Globe Asiatique official Christina Sahagun and Pag-Ibig Fund official Alex Alvarez.

Binay, in an interview transcript released by his office, praised Judge Reyes for her courage in handling the case. “She is not cowed by a disbarment case filed by the camp of Lee,” he said.

The Vice President criticized Lee and his lawyers for exerting effort when Lee was arrested in the hotel to make the police believe that the syndicated estafa case had been junked altogether.

“The arrest warrant has not been quashed,” he said.

Lee will face the court on Monday. His lawyers, after filing a motion on Friday to release him, are filing a motion for habeas corpus to oppose what they called an illegal arrest.

Lee said he stayed in a mango orchard in Subic town in Zambales province in the almost two years that authorities were searching for him.

“The truth is I was staying on a farm. I was just in Subic. I have an orchard there. I was just there. I was alone),” he said in Filipino in a local television interview from his detention cell at the NBI regional office on Friday.

The orchard is in Barangay (village) Asinan proper, a hilly and forested area, an Inquirer source said.