MANILA, Philippines—He may be clean in the eyes of the Department of Justice officials, but Dennis Cunanan would have to do more to convince senators.

After the Department of Justice cleared Dennis Cunanan and slated him as its new state witness on the Priority Development Assistance Fund scam, the senators took a field day taking turns on his credibility. 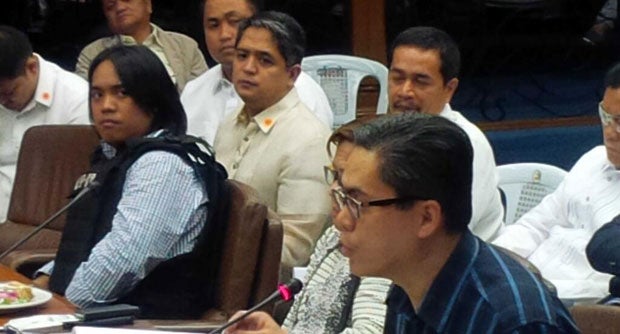 There was no sweeping statement of approval—such as a “buzzer-beating and game-winning three point shot”—to characterize Dennis Cunanan’s testimony on Thursday at the Senate.

Benhur Luy stood in the way of the director general of the state-owned Technology Resource Center (TRC) in his appearance before the Senate blue ribbon committee investigating an alleged P10-billion pork barrel scam.

Cunanan, who is among 38 people being investigated in connection with the racket allegedly engineered by detained businesswoman Janet Lim Napoles, denied that he benefited from the scam and has applied to become a state witness.

But Luy, the principal whistle-blower and former Napoles aide, stood by his earlier statement that Cunanan received at least P960,000 in kickback from the alleged diversion of the congressional Priority Development Assistance Fund (PDAF) to ghost projects.

Senator Grace Poe said that Cunanan should not be eligible for legislative immunity on his part on the P10-billion scam as he allegedly amassed 960,000 from the PDAF scam queen herself Janet Lim-Napoles.

“He should not be given legislative immunity,” Poe said in a radio interview. “Will you tell the whole truth? If he didn’t fulfill that, then he can’t enjoy the privilege that comes with it.”

Poe, who was one of the senators who grilled Cunanan on Thursday, stressed that Cunanan “came up very short in telling the truth.”

Sen. Aquilino “Koko” Pimentel III echoed Poe, stressing that Cunanan should not be given immunity since the new witness is doubtful on his statements.

“The application is doubtful because some have doubts over whether he was telling the whole truth,” Pimentel said in a separate radio interview.

Pimentel added that Cunanan could be “lying” when he denied Benhur Luy’s claims that Luy prepared a bag containing 960,000 for Cunanan on Napoles’ order and that Luy saw Cunanan leave a conference room of the JLN office with the bag.

“On that point he was lying,” Pimentel said.

Furthermore, Pimentel said that Cunanan’s application for immunity was “redundant” as he was provisionally admitted to the Witness Protection Program.

In the face of his claims and contradicting statements, Poe urged Cunanan to come clean and address the issues for his own good and to avoid any court charges that may come in the future.

“What if charges are filed against him later on when he’s no longer immune because he did not include something in his first affidavit? Poe said.

In the Senate hearing, Cunanan claimed that some P600 million in PDAF were coursed through the TRC between 2007 and 2009, the time when he was deputy director-general, denied Luy’s claims of him bagging P960,000.

He claimed that he might have once been on the JLN office in one of TRC’s inspections.

Pimentel also encouraged Cunanan to “tell the whole truth,” otherwise, the defense could pounce on his credibility and destroy the case.

“If you lie in one point, you could be lying in the rest,” he said. “That will affect the entire testimony of Cunanan.”