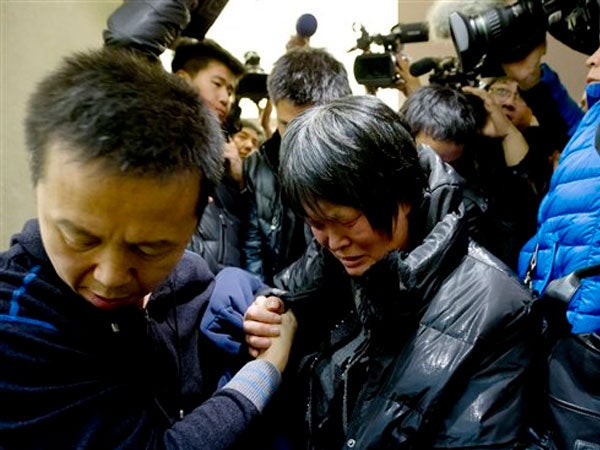 KUALA LUMPUR – Malaysia on Sunday launched a terror probe into the disappearance of a passenger jet carrying 239 people and the United States sent the FBI to investigate, as anguished relatives begged for news of their loved ones.

Malaysia Airlines flight MH370 vanished from radar early Saturday somewhere at sea between Malaysia’s east coast and southern Vietnam. Search teams were still hunting for the plane, and the airline said it was “fearing the worst.”

Concern over a possible security breach grew as Malaysia’s government said it was investigating four people who were on the Boeing 777 plane. 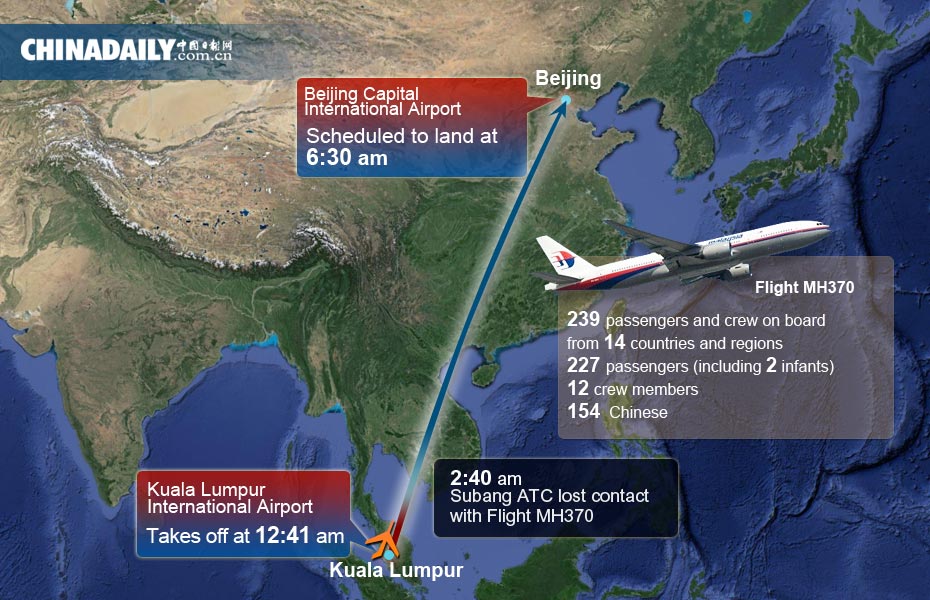 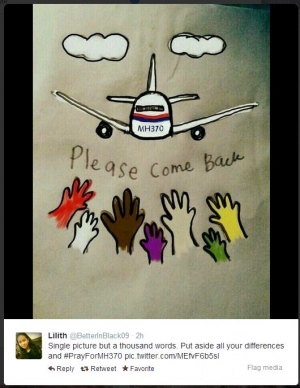 Distraught by news of the missing Malaysian Airlines jet that carried 239 people, netizens took to Twitter to call for prayers.

Since Flight MH370 disappeared on Saturday morning, people of different faiths and nationalities have been posting prayers for the passengers and condoling messages for their relatives.

As a result, the hashtag #PrayForMH370 has been trending on Twitter since Saturday. Photos and artwork about the incident have also been posted on the social network.

“At the same time our own intelligence have been activated, and of course, the counterterrorism units… from all the relevant countries have been informed,” Malaysia’s acting transport minister Hishammuddin Hussein told reporters.

The Federal Bureau of Investigation is sending agents and technical experts to assist the probe, US media reported.

US officials told The Los Angeles Times that they were trying to determine whether there was any terror link to the flight’s disappearance, but stressed there was no evidence to support that yet.

“Just because they (the passports) were stolen doesn’t mean the travellers were terrorists,” a Department of Homeland Security official told the paper.

Asked to confirm the reports, an FBI spokesman told AFP: “We are ready to assist if needed.”

The flight went missing about an hour after taking off from Kuala Lumpur, bound for Beijing. A total of 153 Chinese nationals were on board, and relatives camped out at the main international airport in China’s capital bemoaned the lack of news Sunday.

“The airline company didn’t contact me, it was a friend,” a middle-aged woman surnamed Nan told reporters, holding back tears, after finding out her brother-in-law was on the flight.

“I can’t understand the airline company. They should have contacted the families first thing,” she said.

However, Azharuddin Abdul Rahman of Malaysia’s Department of Civil Aviation said he “could not confirm” the existence of the oil slicks.

“We have not been able to locate or see anything,” he told a news conference on Sunday.

Asked about the stolen passports, he said “we are investigating this at the moment” but declined to give further details.

An Austrian reportedly named Christian Kozel had his passport stolen in Thailand in 2012, while Italian Luigi Maraldi lost his to theft last year, also in Thailand.

Despite their names being on the passenger manifest, neither man was on the plane to Beijing, European officials said.

In Washington, a US administration official said authorities were aware of the passports issue.

“We have not determined a nexus to terrorism yet, although it’s still very early and that’s by no means definitive. We’re still tracking the situation,” the official told AFP.

Earlier, when asked whether terrorism could have been a factor, Malaysian Prime Minister Najib Razak said: “We are looking at all possibilities but it is too soon to speculate.”

Flight MH370 had relayed no distress signal, indications of rough weather, or other signs of trouble. Both Malaysia’s national carrier and the Boeing 777-200 model used on the route are known for their solid safety records.

The flight was carrying 227 passengers and 12 crew. A US company based in Texas said 20 of its employees were among the missing passengers — a dozen from Malaysia and eight from China.

Thirty-eight Malaysians and seven Indonesians were aboard, as well as a range of other nationalities including Australian, Indian, American, Dutch, and French.

Malaysia Airlines urged “all Malaysians and people around the world to pray for flight MH370”.

“The airline is continuously working with the authorities in providing assistance. In fearing for the worst, a disaster recovery management specialist from Atlanta, USA will be assisting Malaysia Airlines in this crucial time,” it said.

China, Vietnam, Malaysia, the Philippines and Singapore threw vessels and aircraft into the effort, as did the US Navy with a surveillance plane and a destroyer carrying two helicopters.

If the worst is confirmed, it would be the second fatal crash in the nearly 20-year history of the popular Boeing plane. A 777-200 operated by South Korea’s Asiana Airlines skidded off the runway after hitting a sea wall in San Francisco last year, killing three people.

Malaysia Airlines has suffered few safety incidents in the past. Its worst occurred in 1977, when 93 people perished in a hijacking and subsequent crash in southern Malaysia.