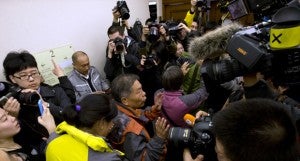 Relatives and friends, center, of passengers aboard a missing plane, are surrounded by media as they arrive at a hotel in Beijing, China Saturday, March 8, 2014. A Malaysia Airlines Boeing 777-200 carrying 239 people lost contact over the South China Sea early Saturday morning on a flight from Kuala Lumpur to Beijing, and international aviation authorities still hadn’t located the jetliner several hours later. AP

HANOI—Vietnam said its search planes spotted oil slicks in the sea near where a Malaysia Airlines jet with 239 people mysteriously vanished on Saturday and was presumed lost.

“We are not certain where these two oil slicks may have come from so we have sent Vietnamese ships to the area.”

The news was the first hint authorities may be nearing confirmation of the fate of the twin-engine jet, which was flying from Kuala Lumpur to Beijing.

The plane had 227 passengers—including 153 Chinese nationals—and 12 crew, according to the airline.

‘My house is a place of mourning’

The plane’s disappearance, apparently without a trace, had made for a torturous day for relatives desperate for news.

At Kuala Lumpur airport, Hamid Ramlan, a 56-year-old Malaysian police officer, said his daughter and son-in-law were on the flight for an intended holiday in Beijing.

“My wife is crying. Everyone is sad. My house has become a place of mourning,” he said. “This is Allah’s will. We have to accept it.”

“Being a policeman over 33 years, this is my worst day.”

MH370 had relayed no distress signal, indications of rough weather, or other signs of trouble, and both Malaysia’s national carrier and the Boeing 777-200 model used on the route are known for their solid safety records.

“We are looking at all possibilities but it is too soon to speculate,” Malaysian Prime Minister Najib Razak said, when asked whether terrorism could have been a factor.

China, Vietnam, Malaysia, the Philippines and Singapore threw vessels and aircraft into the effort.

Najib said the US Navy also had agreed to send planes to help.

Authorities would search “for as long as it takes”, he said.

Overlapping claims to the South China Sea, a resource-rich, vital shipping lane, have been a growing source of friction between China and its neighbours.

Contact with the aircraft was lost at around 1:30 am Malaysian time (1730 GMT Friday), Malaysian authorities said, about an hour after take-off from Kuala Lumpur International Airport.

If the worst is confirmed, it would be only the second fatal crash ever for the widely used Boeing 777. A 777-200 operated by South Korea’s Asiana Airlines skidded off the runway in San Francisco last year, killing three people.

Malaysia Airlines also has suffered few safety incidents. Its worst occurred in 1977, when 93 passengers and seven crew perished in a hijacking and subsequent crash in southern Malaysia.

“You can’t assume that there are no survivors, and if there are any, it is absolutely crucial that they are picked up within a day, or the chances of survival drops significantly,” he said.

The 153 Chinese passengers aboard the plane included an infant, while 38 Malaysians and seven Indonesians were aboard.

Six Australians, four French nationals, and three Americans including an infant, were also among those listed.

Italian media reported that an Italian man whose name was on the passenger list had not actually boarded the plane as he had had his passport stolen, but someone else had apparently done so using the document.

The pilot had flown for the carrier since 1981, it said. The plane was more than 11 years old.

‘We are very worried’

“This news has made us all very worried,” Chinese Foreign Minister Wang Yi said in Beijing.

“We hope every one of the passengers is safe. We are doing all we can to get more details.”

The lack of information sparked fury among anguished relatives in Beijing.

“They should have told us something before now,” a visibly distressed man in his 30s said at a hotel where passengers’ families were asked to gather.

“They are useless,” another young man said of the airline. “I don’t know why they haven’t released any information.”

A deadly accident would be a huge blow for Malaysian Airlines, which has bled money for years as its struggles to fend off competition from rivals such as fast-growing Malaysia-based AirAsia.

Analysts have blamed poor management, government interference, and union resistance to reform for holding back the airline.