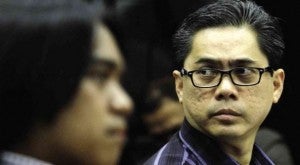 Cunanan and the other agency heads should stop tossing the blame as they did not perform their roles after their agencies took the 3-percent and 10-percent management fees from the pork barrel funds that passed through their offices for the projects of the nongovernment organizations (NGOs) of Napoles that turned out to be fake, Tan said.

“Based on our findings, they have been getting commissions but we have not seen any monitoring of the projects (supposed to be funded by pork barrel funds of lawmakers) because as it turned out, the ones who monitored all the documents were the offices of the concerned legislators,” Tan said.

Tan noted that the COA’s special audit of Priority Development Assistance Fund (PDAF) releases between 2007 and 2009 zeroed in on the shortcomings of the implementing agencies. Allegations that Cunanan and the heads of other implementing agencies received kickbacks from Napoles were made by whistle-blowers like Benhur Luy.

“There was very little effort if at all on the part of the implementing agencies to really do any monitoring. That’s why our question was: If you did nothing, why collect management fees?” Tan said.

She said that if the proper process was followed to the letter, the implementing agencies should have implemented the project themselves instead of acting as mere conduits for the fake NGOs.

Justice Secretary Leila de Lima on Friday said that Cunanan, who is on leave from the TRC, will be given the opportunity to refute—or admit—that he, too, had received kickbacks from the ghost projects of the fake Napoles NGOs that received the pork allocations from the lawmakers’ PDAF.

“We’re giving him a chance to explain or rectify himself on the issue of his allegedly receiving kickbacks,” said De Lima.

She said that the Department of Justice (DOJ) was waiting for what Cunanan has to say on that point so the government would know what step to take next.

At Thursday’s Senate hearing, whistle-blower Luy claimed that he saw Cunanan leaving the office of Napoles carrying a paper bag that contained P960,000 in kickback money.

Cunanan denied having received any money although he said he was trying to remember if he did visit Napoles’ office as part of TRC officials’ regular duties to inspect the NGOs accredited by the agency to implement PDAF-funded projects.

Cunanan and Luy have been provisionally accepted to the government’s witness protection program (WPP) and have applied to become state witnesses.

De Lima said she did not think the credibility of Cunanan and Luy would be affected by their conflicting testimonies.

“Benhur remains to be a very credible witness. He has not given us reasons or indications to doubt his credibility and the credibility of his story about the entire PDAF scam,” she said.

She said it was the first time that she heard Luy relate the story of having seen Cunanan carrying a paper bag as he left Napoles’ office.

But she admitted that the conflicting claims of Luy and Cunanan regarding the latter’s alleged acceptance of kickbacks “complicated” the situation.

However, De Lima stressed that the value of Cunanan’s testimony was his allegation that three senators—Jinggoy Estrada, Bong Revilla and Juan Ponce Enrile—had contacted him to follow up on the ghost projects to be funded by their pork funds.

“If only we focused on the substantive aspect of his testimony, it would be good [for the case]. We heard many things from him that are important to the main issues of the PDAF scam. But because of his denials that he received kickbacks … we did ask him about it but he was consistent in his denials,” she said.

But she hinted that Cunanan’s admission to the WPP could be affected if he fails to explain or prove that he did not accept kickbacks. But she quickly added, “I don’t want to make a definitive action at this point while I haven’t heard his side. He has to explain himself.”

“The remedy that I can see at this point, while we’re evaluating [Cunanan’s] continuing status as provisional state witness, is for us to give him a chance [to explain],” she said.

Sen. Aquilino Pimentel III on Friday said De Lima should sort out the conflicting testimonies of Luy and Cunanan lest it jeopardize the government’s case.

Pimentel wondered how the DOJ could have admitted Luy and Cunanan into the WPP when they had “conflicting versions” of the alleged payoff to Cunanan.

“How come we have two people admitted into the WPP, and on one material incident, they have two conflicting versions?” the senator said in a phone interview.

“One said it happened and one said it never happened. And they are both truthful. How did that happen?” he said.

As a matter of policy, applicants are accepted into the WPP not only because they’re telling the truth, but the “entire truth,” Pimentel said.

Pimentel, a lawyer, said WPP witnesses should be truthful in the “entirety of their testimony” lest they be challenged by the legal principle “falsus in unum, falsus in omnibus” (false in one, false in all).

“When you’re lying in one item of your testimony, you might have lied in the rest of your testimony. That will become an opening for the defense counsels. They will now take advantage of that,” he said.

Pimentel said if the DOJ wants to present Luy as the “star witness,” then Cunanan’s testimony must be “measured against” Luy’s.

“And if it’s Cunanan who is inconsistent with Benhur Luy, and Benhur Luy’s testimony is more important, then the less important witness must be discharged from the WPP. Because you can’t have this funny situation where you have two truthful witnesses, and yet contradicting each other,” he said.

It would be all right for a witness outside the WPP to contradict the testimony of a WPP witness, but it’s a different matter if both are WPP witnesses, Pimentel pointed out.

Pimentel believes that Cunanan’s testimony was not indispensable.

He said Cunanan’s “phone conversations” with the senators constituted “weak evidence” that could be easily punctured by the defense. He said Cunanan should have made personal visits to the lawmakers to verify their authorization letters.

If at all, he said Cunanan could only provide documents used in processing the transfer of funds from TRC to the NGOs, which would constitute strong evidence, but others could also testify on these.

In a radio interview on Friday, Sen. Grace Poe expressed her reservations about admitting Cunanan as a state witness.

“He wasn’t telling the whole truth especially about himself … He was pointing to others John Travolta style. He’s blaming others, except himself,” she added.

If Cunanan had admitted receiving the P960,000, he would have been more credible, said Poe.

Sen. Juan Edgardo Angara, for his part, said Cunanan’s credibility wasn’t “cut and dried” as that of Ruby Tuason, who admitted receiving commissions by acting as a middleman between Napoles’ JLN Corp. and the lawmakers.

“He’s credible on some points but not all, especially where they differed with Luy,” he said.