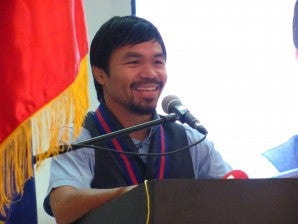 MANILA, Philippines — Vice President Jejomar Binay announced on Friday that boxing icon and Saranggani Representative Manny Pacquiao would be included in his senatorial slate in 2016.

Binay, in an interview, said 40-year-old Pacquiao was qualified to run for the Senate.

In a press conference Friday, Binay said that he was already talking to Pacquiao about running for senator even before the 2013 senatorial elections.

“Yes, we will include him in the [senatorial] slate,” Binay told reporters when asked whether Pacquiao will be one of his candidates.

“We have been in talks for a long time. Even before the 2013 elections,” he said.

Binay has previously announced his intentions to run for president in 2016. He said that they were looking for more candidates that were interested in the senatorial state as early as now.

“We are looking for those interested to run for senator. We don’t want to repeat what happened [in 2013 where] we didn’t field a full slate of 12 candidates because of lack of time,” he said.

“Hopefully the 12 will be completed long before elections,” Binay said.

Among the candidates being considered as his running mate were Batangas Governor Vilma Santos-Recto and Senator Jose “Jinggoy” Estrada.

Binay, however, clarified that nothing is final yet until he has made a formal declaration.

Pacquiao ran as congressman under the Nacionalista Party headed by former Senator Manny Villar, who ran for president in 2010 and was PDP-Laban’s gubernatorial candidate in 2012.

Binay refused to identify the other candidates who would be included in his senatorial ticket.

Pacquiao backs Villar on tape: He’s one of us, was poor before