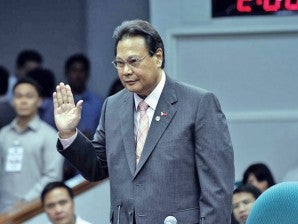 Corona’s arraignment has been set for March 26 in the CTA Third Division and April 2 in the CTA Second Division.

The filing of the tax evasion case against Corona came seven months after the Bureau of Internal Revenue filed the complaint against him.

The BIR complaint was based on documents on his properties that surfaced during his impeachment trial. The Senate impeachment court convicted Corona in May 2012 for failing to declare his true income in his statement of assets, liabilities and net worth.

In an interview with reporters, Arellano said the DOJ task force headed by Senior Assistant State Prosecutor Edna Valenzuela had found probable cause to charge Corona with tax evasion.

He said Corona filed a motion for reconsideration of the task force resolution but this was denied last week.

He said the tax evasion case against Corona’s daughter, Carla, and her husband, Constantino Castillo II, had not yet been resolved by the task force.

“We are inclined to believe the documentary evidence presented by the BIR still outweighs the claims of Corona,” Arellano said.

In its complaint, the BIR said Corona owed the government P120.5 million in taxes, inclusive of surcharges and interest, from 2003 to 2010.

It said Corona in his SALN undervalued three of his properties by P17.30 million, failed to declare two properties valued at P12.75 million and only declared cash assets of P134.44 million in 2010.

Corona’s daughter was sued for P9.93 million and her husband, for P20.24 million.

Reacting to the tax-evasion case, Corona said he was a “victim of the Priority Development Assistance Fund and Disbursement Acceleration Program anomalies that whet the insatiable gluttony of many senators and congressmen for public funds.”

He said he was under no illusions about receiving fairness and justice from the DOJ which is headed by Secretary Leila de Lima who testified against him in the Senate trial.

“Why am I now being persecuted? I have done no wrong, earned our savings honestly for 45 years, filed my income tax returns and SALNs truthfully, paid all my taxes to the government and was never involved in any anomaly or illegal transaction,” he said.