Some bishops cool to Suarez ministry 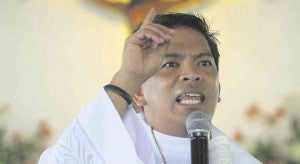 Tagle served on the foundation’s board of directors, but he left when he was named archbishop of Manila in 2011.

“I left the board of Mary Mother of the Poor Foundation when I came to Manila from Cavite so I am not aware and not involved in the latest developments,” Tagle said on Friday through Peachy Yamsuan, communications chief of the Archdiocese of Manila.

Tagle was still in the Vatican when sought for comment on the failure of the deal between SMC and MMP. He flew to Rome last week to attend the consistory where Pope Francis elevated Cotabato Archbishop Orlando Quevedo and 18 other prelates to the College of Cardinals.

SMC donated a 33-hectare property in Alfonso town, Cavite province, four years ago for Suarez to build a “mega-shrine” to the Virgin Mary that would have a statue of her taller than the 30-meter-high statue of Christ the Redeemer in Rio de Janeiro.

Tagle said the donation had conditions. “It is clear that if the foundation fails to meet them, the land would go back to SMC. Maybe that was what happened,” Tagle said.

The Inquirer learned that the donation required MMP to build the shrine within five years of the signing of the agreement.

This is the fifth year, but despite receiving millions of pesos from local supporters and millions of dollars from foreign believers, MMP has not shown SMC the plans for the shrine.

A source familiar with SMC’s side of the deal told the Inquirer that MMP had asked for an extension, but without any sign of progress in the concept for the shrine the company was unwilling to extend the agreement.

The two sides were expected to announce the termination of the donation agreement this week.

Suarez was not available for comment. He was on a pilgrimage to the Holy Land.

When asked what Tagle thought of talk that he was “unfriendly” toward Suarez because he looked down on the priest’s activities, Yamsuan said it was something that the cardinal would rather not comment on.

The Catholic Church is not quick to recognize healing powers. As an organization, the Catholic Bishops’ Conference of the Philippines (CBCP) is respectful about Suarez’s claims of having healing powers, but some of its members are wary about his pursuits.

A Church official who requested not to be identified said several bishops closed their doors on Suarez because his healing ministry had turned out to be a moneymaking venture.

“There was trouble in the Diocese of Mindoro [where Suarez is affiliated], the clergy was divided and apparently he was one of the causes of that division. Then little by little, bishops here and there no longer allowed him to conduct healing sessions in their dioceses because of suspicion that he was making money out of healing and already fooling people,” said the Church official.

“He was healing here and there and asking for contributions, selling blessed rosaries and medals,” he added.

Cruz said last Friday that he publicly reprimanded Suarez in 2008 for celebrating Masses and holding healing sessions in his archdiocese without his permission.

Cruz sounded disapproving of the healing sessions, saying such activities were “open to abuses, like superstition, hysteria, fanaticism and money.”

Cruz said he had heard “bad news” about Suarez.

“Among the bad news I remember was that he was a fake and that he was money-oriented and that his ‘healing ability’ was not true,” Cruz said, adding that he did not believe Suarez had healing powers.

Cruz said he had heard accounts of Suarez raising the dead, which he described as “incredible.”

He said he found it strange that Suarez went around looking for sick people when “honest-to-goodness” healers recognized by the Church like Padre Pio and Mother Teresa did not travel in search of sick people to heal.

“[The sick] people are the ones who go to them. It’s the sick who seek them. [Healers] don’t seek the sick, like Father Suarez,” Cruz said.

Oliveros was not available for an interview when the Inquirer sought him out for comment last Friday.

Fr. Dars Cabral, chief of Malolos Commission on Family and Life, said the ban was imposed three years ago after Suarez held a healing session in the diocese without permission from Oliveros.

The ban stays, Cabral said, adding that he would know how Oliveros would react if Suarez came to apologize and ask for permission to celebrate healing Masses in the province.

A local priest, who requested anonymity because he was not authorized to speak to the press, said a healing session was held at Sta. Rita Parish Church in Guiguinto town in 2011 without permission from the bishop.

The priest compared Suarez’s activity to a plumber fixing a leak in a house without being called in by the homeowner.

But Suarez must have been carrying out his ministry in Malolos even earlier. At a news conference in 2008, Oliveros announced that he was writing a formal complaint to the religious superiors of Suarez to inform them that the priest had been coming to the Malolos diocese in violation of the rules of the Congregation for the Doctrine of the Faith.

The congregation’s rules require Church-related ministries, like public healing or prayer session, to have explicit permission of bishops.—With a report from Carmela Reyes-Estrope, Inquirer Central Luzon