Despite high cost, PNP will maintain heavy security for Napoles 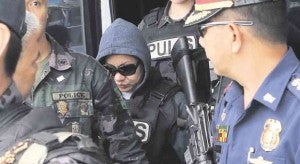 UNDER TIGHT GUARD Janet Lim-Napoles, principal suspect in the P10-billion pork scam, wears a bulletproof vest and hooded sweatshirt as she arrives for a medical checkup at PNP General Hospital in Camp Crame, Quezon City, on Wednesday. LEONITO NAVALES/PNP-PIO

MANILA, Philippines—The Philippine National Police will maintain the heavy security given to Janet Lim-Napoles despite it being relatively expensive and excessive, a police official said Thursday.

However, Sindac maintained that the PNP is merely following certain protocols in its security operations for high-risk detainees.

In a separate interview, he revealed that the PNP spends an estimated P120,000 each time Napoles travels ‎for her trials in Court, appearance in Senate and the latest, her medical check-up due to a mass in her abdomen.

Sindac said the PNP would leave the decision to Special Action Force, the primary police unit responsible in Napoles’ security, whether they would minimize the security personnel and trim down costs provided for the detained businessman.

“We cannot give a price tag for the safety and security of high-risk detainees like Napoles,” he added.

Despite the calls to transfer Napoles to a city jail for economic reasons, Sindac defended that the police will “leave no stone unturned” with regard to the safety of Napoles.

“We would not want to wait for the time that something will happen to her and it would be blamed on our organization,” he explained.

In reaction to critics saying Napoles is more heavily-guarded than President Benigno Aquino III, Sindac argued that the trips of businesswoman are not as frequent and regular as that of Aquino.

“As o‎f now she only had three regular trips outside of the detention cell. The fourth one as an emergency, which did not entail much expense,” he said.