‘There was money, why was shrine not built?’ | Inquirer News
Close
menu
search 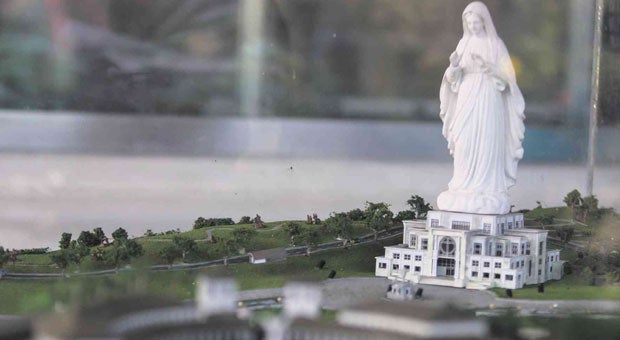 MANILA, Philippines—Even before San Miguel Corp. (SMC) donated a 33-hectare property in Cavite province to Mary Mother of the Poor (MMP) Foundation, an external audit on the religious and charitable institution founded by healing priest Fr. Fernando Suarez had already disagreed with its bookkeeping practices.

In 2010, an audit report prepared by SGV and Co. carried a cover letter that pointed to possible trouble in the future. It said: “The foundation’s policy is to prepare the accompanying financial statements in accordance with the modified cash basis of accounting… which is a comprehensive basis of accounting other than the accounting principles generally accepted in the Philippines.”

A former ranking SGV official consulted by the Inquirer explained that the statement meant “we disagree with some of your practices.”

In an interview last week, however, MMP board member Lourdes “Deedee” Siytangco said the foundation’s dealings were aboveboard. Proof of this, she said, is MMP Foundation’s commissioning an SGV audit last year, subsequently receiving accreditation from the watchdog group Philippine Council for NGO Certification (PCNC).

Fr. Suarez has not returned from a pilgrimage to the Holy Land.

“We also got the PCNC clearance that [says] we are a legitimate NGO (nongovernment organization),” Siytangco said. “It is true that in the beginning, it was a tayo-tayo family-type thing. But with the new board now, we have legitimized everything. We had gone through the audit. Because we were also concerned that people were talking [about it].”

MMP’s corporate secretary, lawyer Lorna Kapunan, also pointed out that the PCNC accreditation indicated that the foundation’s finances were in order. “Because of pseudofoundations and cults being set up, now you’re required to get accreditation from a group called PCNC. PCNC has very stringent rules, like [requiring] track record and good governance. In fact, it took us quite a while [to be accredited].”

The 2010 audit report’s cover letter said: “It is not practicable for the foundation to establish control over their donations prior to their initial entry in the accounting records nor is it practicable for us to circularize possible donors or perform other auditing procedures to satisfy ourselves that all donations have been received and recorded. Accordingly, our audits relating to donations were limited to the amount recorded in the accounts.”

In other words, the former SGV official explained, in trying to include in its financial statements donations that had yet to be given, MMP Foundation was, in effect, counting its chickens before they hatched.

“What the SGV auditor was trying to say here is, ‘We can only tell you everything that you record. We can only say what’s in front of us. We don’t know what [funds] really came in.’ [The auditor] doesn’t know what’s not in front of him,” he said.

“To put it differently, the auditor is saying, ‘I can’t state anything that I can’t see. I don’t know whether funds came in or [went] out based on the records available,” he said.

But even after “pledged” donations were stripped out, the foundation that handled the affairs of Suarez’s healing ministry appeared by no means destitute.

According to the SGV-prepared balanced sheet, the foundation had total assets of P179.8 million at the end of 2009, representing an almost 19-percent increase over the previous year’s asset base of P151.1 million.

Of this amount, P61.2 million was in the form of cash or cash equivalent, while P49.5 million was booked as receivables.

The foundation also had property and equipment worth P59.4 million, “investment in subsidiaries” valued at P2 million and other assets worth P7.6 million.

Against these assets were accounts payable and other liabilities amounting to P11.5 million, leaving the total fund balance of unencumbered equity at P168.3 million—an increase of almost 14 percent from its 2008 level.

Enter SMC, the country’s largest conglomerate. Upon hearing about Suarez’s troubles with a previous land donor in Batangas City, SMC president Ramon Ang—a regular contributor to Catholic Church charities—stepped in and offered a portion of the company’s sprawling property in Alfonso town, Cavite province, for the healing priest to build his ambitious project: a “mega-shrine” to the Virgin Mary with a statue of her that would be taller than the 30-meter-high Christ the Redeemer in Rio de Janeiro.

The deed of donation was executed on Jan. 11, 2011, between San Miguel Properties Inc. and “The Philippine Foundation of Blessed Mary, Mother of the Poor Inc.”

At the same time, a source familiar with MMP’s financial situation told the Inquirer that it had been trying to gain PCNC accreditation “for the last three years” but had failed to get it because of unresolved questions involving the foundation’s financial statements.

A visit to PCNC’s website yielded information that MMP Foundation (officially named The Philippine Foundation of Blessed Mary, Mother of the Poor Inc.) received its accreditation on Oct. 14, 2013, valid until Aug. 23, 2014.

The website said “total donations received for the last two years amounted to P71.84 million.” The foundation’s “approved budget for 2013 is P364.36 million, which will be funded by expected donations and pledges of P371.93 million, mostly for the construction of the shrine,” it said.

But a former member of the board of MMP Foundation told the Inquirer that the funds held by the group in the Philippines were “loose change” compared to its money stashed in US banks.

The former MMP Foundation board member, who spoke on condition of anonymity, said the funds held by MMP Foundation consisted only of local donations.

“Maybe P50 million,” he said, when asked about the size of the local donations. “That’s small. The bulk of the donations comes from US and Canada, and is kept in US bank accounts.”

The foreign funds are raised from the sale of rosaries made by Suarez’s local devotees and are sold to people who attend his healing Masses overseas. Produced at a very low cost, the rosaries are sold at a markup.

“If they’re sold for $5 each, people in the US and Canada will give us $100 for one piece,” the former board member said, adding that affluent devotees in North America don’t mind paying more for a single rosary blessed by Suarez.

“That’s where the bulk of the funds come from,” he said. The funds are kept separate from MMP Foundation’s books, he said, and are under the direct control of Suarez.

Asked how much funds were stashed in US banks, the former board member replied: “Over $3 million.”

He said that with the financial resources available to Suarez’s group, the P1-billion shrine to the Virgin Mary that was planned for the donated SMC property in Alfonso could have easily been built.

“The money was available. So why was it not built?” he said. “Sadly, [Father Suarez] also made some bad financial decisions.”

The Inquirer contacted Greg Monteclaro, president of MMP Foundation at the time of the SMC donation.

Monteclaro said that at one point, Suarez had a falling out with his Canada-based order, Companions of Christ, and eventually left the group to start a new congregation.

He declined to say what led to the parting of ways between Suarez and the Companions of Christ, but shared his personal recollections and views on Suarez.

Monteclaro said it was his wife who introduced him to Suarez whom she met on a pilgrimage to Jerusalem. Suarez was then an itinerant priest.

Monteclaro said he invited Suarez to live in his house and even drove him around on his healing missions.

He said Suarez lived in his house for three and a half years, during which the priest exhibited simplicity and piety.

“Father Suarez is an anointed person and he has the gift of healing,” Monteclaro said. “Together with Deedee [Siytangco], Manolo Lopez—the original group [of devotees]—we really believe in his gifts. That’s why we are sorry. What a pity.”

Monteclaro said: “I’ve been with him almost 24 hours a day, and our last stop—even if it’s 2 or 3 o’clock in the morning—is always [to pray before] the Blessed Sacrament. That’s how he is. But he changed. I don’t know why.”