38 women? Just suspicions of a wife–Enrile 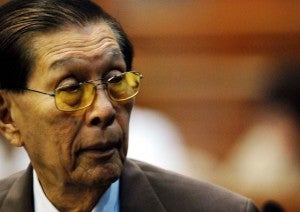 MANILA, Philippines—Affairs with 38 other women and these were just a wife’s suspicions?

Senate Minority Leader Juan Ponce Enrile on Wednesday brushed off his wife Cristina’s allegations—made in an interview aired over national television—that he was a womanizer.

Cristina also confirmed that her husband had carried on an affair with his former chief of staff, lawyer Jessica Lucila “Gigi” Reyes.

“Those are suspicions of a wife,” Enrile told reporters when he was asked about his wife’s remarks on his alleged unfaithful ways in an interview with Inquirer columnist Winnie Monsod on GMA public affairs program “Bawal ang Pasaway” on Monday.

Cristina said her 90-year-old husband had 38 affairs over the course of their 56-year marriage. “He’s not palikero [playboy]. The women are the ones who [offered themselves to him.]”

Pressed if he was denying them, Enrile said: “I said already. Suspicions of a wife.”

Enrile had no idea that his wife would have a television interview with Monsod.

Cristina said her husband may have been a womanizer but was never a thief.

“I didn’t know she was giving an interview,” said Enrile, who managed to smile before entering the elevator to end the chance interview with reporters.

The senator is facing a plunder charge in the Office of the Ombudsman in connection with the alleged P10-billion pork barrel scam.

Reyes, who is out of the country, is one of those charged in the case.

She was implicated in the scam as the one who allegedly dealt with Janet Lim-Napoles’ network of dubious nongovernment organizations through which Enrile’s Priority Development Assistance Fund allocations were coursed.

She was also accused of receiving kickbacks from the scam.

“Yes it’s true,” Cristina told Monsod when asked if Reyes was the reason she wanted to leave Enrile at one time during their marriage.

Cristina said her husband’s relationship with Reyes was already taking too long compared with the shorter affairs he had with other women.

“Somebody told me that it’s not the only time. It’s more years that you don’t know [about]. So that’s what got me,” Cristina said.

Reacting to Cristina’s revelations, Reyes said, “They are not all lies. But half-truths are half-lies as well,” GMA News Online reported Wednesday night.

“Mrs. Enrile has her own reasons for muddling the facts, painting her own picture of her marriage and laying the blame on women, who, she said, were the ones who ‘offered themselves’ to her husband. Excuse me, I certainly did not offer myself to him,” Reyes said.

“So, kasalanan ng lahat ng mga babae. Walang kasalanan si senator kase lalaki lang siya. Natural lang… Ganun ba? (So, it’s the fault of the women. And the senator did nothing wrong because he’s a man and it’s just natural for him. Is that so?),” Reyes said. With Maila Ager/INQUIRER.net