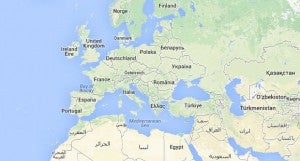 VIENNA – A third of women in Europe have suffered a physical or sexual assault and five percent have been raped, a major new study revealed Wednesday, uncovering “extensive human rights abuse” throughout the European Union.

In addition, just over one in 10 women indicated that they experienced some form of sexual violence by an adult before they were 15 years old, according to the large-scale survey by the EU Agency for Fundamental Rights (FRA).

The damning report “shows that physical, sexual and psychological violence against women is an extensive human rights abuse in all EU Member States,” the group’s director Morten Kjaerum said.

Kjaerum called for measures tackling violence against women “to be taken to a new level now.”

The FRA, which interviewed 42,000 women aged 18-74 across the 28-nation bloc for the report, said it was the most comprehensive of its kind to date both in the EU and worldwide.

“What emerges is a picture of extensive abuse that affects many women’s lives, but is systematically under-reported to the authorities,” Kjaerum said.

The FRA probed women’s experiences of physical, sexual and psychological violence including domestic abuse, as well as stalking, sexual harassment, childhood experiences and the role played by new technologies.

He said that “violence against women, and specifically gender-based violence that disproportionately affects women, is an extensive human rights abuse that the EU cannot afford to overlook.”

The emotional and psychological consequences of physical and sexual violence “can be long-lasting and deep-seated,” the survey said.

Over a fifth of the victims of sexual violence suffered from panic attacks, over a third became depressed and 43 percent spoke of difficulty in subsequent relationships as a result.

There were sizeable differences when the survey’s findings are broken up by country.

At the top end, 52 percent of women in Denmark were said to have suffered physical and/or sexual abuse, while the rate was 47 percent in Finland and 46 percent in Sweden.

At the other end of the scale, the report found that 19 percent of women in Poland had suffered in the same way, 20 percent in Austria and 21 percent in Croatia.

The report said higher levels of gender equality could lead to more disclosure of violence in some countries.

The report also cited a World Health Organisation finding of “a relationship between perpetrators’ drinking habits and women’s experiences of domestic violence,” noting that differing drinking patterns among countries could help explain certain aspects of such abuse.