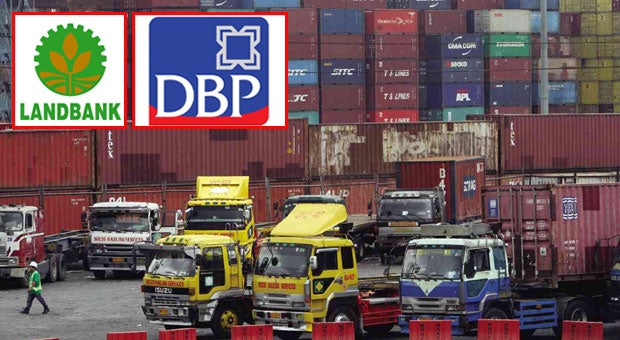 The Manila City government’s move to shorten the running time for truckers under a revised truck ban will soon result in longer working hours for some Landbank and Development Bank of the Philippines employees and warehouse personnel.

The Manila City government’s move to shorten the running time for truckers under a revised truck ban will soon result in longer working hours for some government bank employees and warehouse personnel.

“Because of the truck ban, we are asking the Landbank and Development Bank of the Philippines (DBP) to go on extended working hours until 9 p.m.,” Juan Sta. Ana, Philippine Ports Authority (PPA) general manager, told reporters on Tuesday after a roundtable discussion with stakeholders.

Land Bank of the Philippines president Gilda Pico and DBP senior vice presidents Nilo Cruz and Anthony Robles were present during the meeting and agreed to the longer banking hours to facilitate transactions with importers and exporters and accommodate the payment of customs duties and permit fees.

Officials of the Philippine Chamber of Commerce and Industry and Philippine Exporters Confederation Inc. also agreed to inform warehouse owners to extend their operating hours until nighttime to receive deliveries.

The Manila government implemented a revised truck ban starting on Feb. 24, restricting their operations to between 9 p.m. and 5 a.m. Following a three-day “truck holiday” and appeals from businessmen and national government agencies, Mayor Joseph Estrada announced that he would temporarily allow them to ply their routes during the window period of 10 a.m. to 5 p.m. but only for the next two weeks.

However, the strike staged by trucking groups on top of their limited operating hours have resulted in congestion at port harbors, which since last week has resulted in the Bureau of Customs extending its processing hours.

“Customs collection is down by P100 million to P150 million a day. The whole economy is suffering because of this,” Customs Commissioner John Philip Sevilla said.

Sta. Ana clarified that ports have been operating 24/7 since 1988 to accommodate vessel and cargo operations. “We are trying to cope with the limited operating hours of trucks so that the flow of cargo, which is essentially trade and commerce, is resolved,” he said.

Bert Suansing of the Confederation of Truckers Association of the Philippines said Manila’s implementation of the daytime truck ban to solve traffic congestion was like the Voltaren solution.

“Voltaren is medicine prescribed to address pain for arthritis but it [affects] the kidney. You might be addressing a problem but the solution gives birth to bigger problems,” he clarified.

Suansing said truckers would charge cargo owners with road congestion charges, which would just be passed on to consumers.

When truck operations were restricted to nighttime during a tryout period in 1991, it resulted in a 50 percent increase in trucking fees and a 30 percent spike in retail prices, he added.

Because of the limited hours, truckers may also field more vehicles than necessary to move additional cargo, he said.

“The only way to do that is to spread the flow of goods over 24 hours. It has always been our position at ICTSI that the solution is proper road infrastructure,” Gonzales said. “The Department of Public Works and Highways has already been very serious in getting projects started that will alleviate traffic. Unfortunately, it’s going to take three to four years to get these done.”

He added that all parties should try to find ways to solve the traffic problem aside from the truck ban, which was bad for trading.

Stakeholders suggested an appointment system wherein trucks only go to ports as needed as well as a 24/7 dedicated route for trucks.

Meanwhile, truckers hauling vegetables from Benguet province have asked Estrada to exempt them from the ban to avoid disrupting deliveries to Metro Manila markets, possibly causing a supply shortage and price hikes.

Benny Hipolito, president of the Benguet Truckers and Traders Association, said the alternate route that they were being forced to take due to the truck ban meant another hour or two before vegetables reach their destination.

Truckers suspend strike for a week

Read Next
Pasig River ferry makes comeback bid with MMDA prototype
EDITORS' PICK
Gov’t plans to open COVID-19 vaccination for 5- to 11-yr-olds by January 2022
Gov’t eyeing COVID-19 vaccine booster for essential workers, indigents by Dec. 10
Villar Group gears up for AllValue Shopping Party on Dec. 3; around P 1-million promos and discounts up for grabs
Keep ransomware at bay with these security and backup strategies
Omicron variant detected in more countries as scientists race to find answers
A delightful blessing!
MOST READ
Quiboloy warns of ‘much worse than Omicron virus’ if his ‘persecution’ is not stopped
Two cases of Omicron variant detected in Canada, govt’ says
MMDA: Number coding during afternoon rush hours back this week
Marcoleta defends pol ads on ABS-CBN
Don't miss out on the latest news and information.