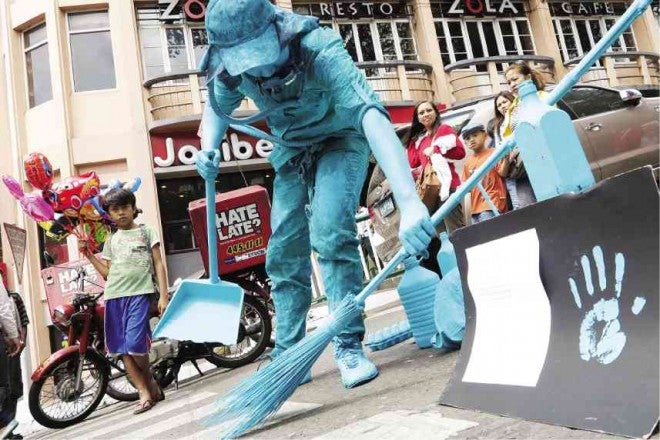 Painted in blue from head to toe, Rey Angelo Aurelio strode through the crowd on a side street from Session Road on Sunday, carrying a broomstick and dustpan.

It was the last week of the 19th Panagbenga (Baguio Flower Festival), when rows of eateries and products made up the annual street bazaar called “Session Road in Bloom,” and performance artists like Aurelio took the backseats during the month-long tourist-drawing attraction of the summer capital.

Baguio’s art community had set up a booth at the side street that was obscured by the larger booths owned by leading restaurants. But as the festival wound up on Sunday, many of its members declared that art and culture should once more be the core of the 20th Panagbenga in 2015.

Aurelio roamed the bazaar unannounced. He was performing a tale he drew up called, “The Street Sweeper,” who became a god to whom people prayed so that the deity could clean up a world taken over by garbage.

Sculptor Santos Bayucca of Ifugao province, a member of the Baguio arts movement called AX(is), said the artists could no longer afford the cost of leasing space on Session Road during the week-long Session Road in Bloom. AX(is) put up a small bus made of recycled tarpaulin, which opens and folds into a rectangular booth filled with art pieces, on the side street.

Some artists won’t even bother, preferring to distance themselves from the operations of the bazaar, which they describe as a large, discordant market.

In early versions of the festival, artists’ groups managed to host booths to feature their works, Bayucca said.

Tahimik proceeded to design flower and butterfly tents for stalls and for street-side tables that were put up on Session Road during the 2005 Session Road in Bloom. He also installed stations, for different performers, throughout the length of lower Session.

Bayucca, one of the artists who helped Tahimik execute these ideas in 2005, said the artists intended to inject community art and the Baguio community’s traditions into the festival because the previous festival incarnations were already being criticized for being venues for the advertising wars of television networks and telecommunication firms.

The festival was started in 1995 by civic leaders and officials of Camp John Hay, like lawyer Damaso Bangaoet Jr., who needed a crowd-drawing event to resuscitate Baguio tourism. The city had rebuilt after the devastation caused by the July 1990 Luzon earthquake.

It was only in 2005 when artists played a prominent role in the annual festival.

The Baguio Flower Festival Foundation Inc. (BFFFI) tried to repeat Tahimik’s idea. During the 16th festival, for example, it incorporated “Ipitik,” an indigenous wine festival, at Burnham Park as a major event.

In the last few years, the organizers have also been tapping cultural consultants to ensure that the Cordillera elements of the festival are respected.

Bayucca said Tahimik was never completely out of the picture.

Since 2012, he and Tahimik have been building monuments at a rotunda for Baguio: a Cordillera hut in 2012, an indigenous vessel (a “balangay”) that towered over the road in 2013 and bamboo birds this year.